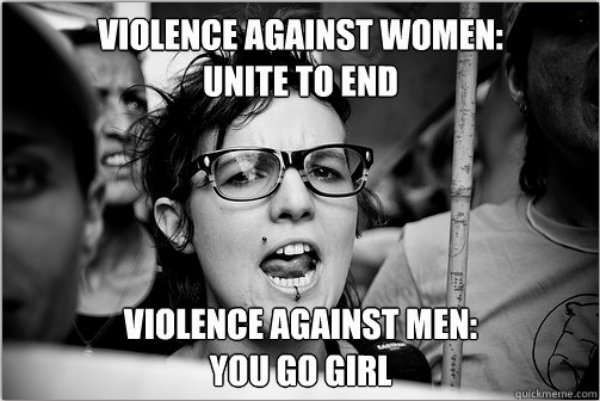 In countries like the US, data wasn't even collected on many cases where men are the victims. Even in one of the most progressive, feminist countries in the world, the US, female rape victims are elevated above males.


"Forcible rape, as defined in the FBI’s Uniform Crime Reporting (UCR) Program, is the carnal knowledge of a female forcibly and against her will. " (source)

Note the gender specific language. Why is it there? Do you think that if the same deed happens to a man, for example a prisoner, that it doesn't count as forcible? If a man is sodomised against his will, it's somehow less traumatic?

I've read that the man victims of rape in the US are actually black men because of the overwhelmingly high rate of incarceration. The manipulation of the statistics to exclude them from the figures is political as it keeps the focus on women and diminishes the suffering of men.

If you truly believe in equality, remove gender specific language from laws, except of course, where biology requires it, which is pretty damn rare.

I was watching a popular video clip on youtube, a song from a black woman's perspective, where she goes on about young black men being worthless as mates because they work at minimum wage jobs. No wonder so many men get involved in crime. If the only way to get a girlfriend or a wife is to be a criminal, well, I'd be breaking bad too.
Posted by Brett Caton at 11:51