Violence against men is A-Ok! 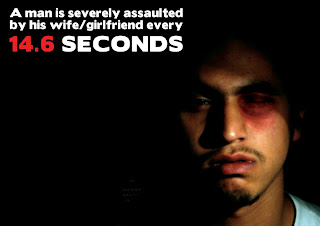 Can you imagine a government sponsoring an ad like this?
Male victims are invisible.

I have had several criminologists insist that there are no statistics to prove domestic violence against men exists.


Note the gender based language below. Why is the phrase "against women" necessary? Isn't violence "against people" bad if you truly believe in equality rather than female supremacism?


Why is the wikipedia page full of entries that read as if domestic violence only had female victims?

Convention on preventing and combating violence against women and domestic violence


"A Florida woman is jailed on a battery rap for allegedly striking her boyfriend after he “finished first and stopped pleasuring her” during a mutual oral sex session late last night in the victim’s home, police report.

When her amorous advances were repeatedly rejected by her live-in boyfriend, Krystle Harrison allegedly “bit his penis” in retaliation, police allege.


Harrison allegedly slapped her beau in the face and “then spit in his facial area.” Wilkinson also “received minor scratches to his upper chest” during the tangle with Harrison, whom he has dated for three years.


Why is it called "battery?


Simple battery is a misdemeanor.

That's one way to preserve the status of women as victims and never perpetrators. They won't show up in the statistics unless they are also charged with felonies, just like men are.

Even when they are charged with felonies, the removal of domestic violence charges from the rap sheet is telling.

For example, Sarah Wulchak bit off half of her boyfriend’s left ear during a fight in the victim’s home, and was arrested  and charged with aggravated assault

Jailed in lieu of $1000 bond on the felony assault charge, has been booked into the Volusia County lockup on about 20 separate occasions over the past decade.

What can we do?

"Men are sometimes not the targets of data collection efforts."

I'd say almost never. I know from personal experience that men who are the victims tend to blaim themselves. It isn't 'manly' to be afraid of a woman, or be unable to stomach the pain of their violence. "You hit like a girl!" is the traditional insult, after all.

There is hope for change!