Women cannot consent because they are feeble and timorous beasties

As we know, Feminists believe all men are rapists.

"What?!! They do not!", I hear you say, assuming I have hacked your webcam, as is my wont.

Well, how do you explain this poster? 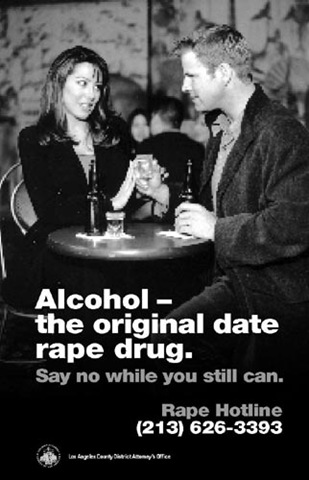 The evil man is suggesting that she drink, because her feeble ovaries are incredibly vulnerable to an alcoholic onslaught, whereas his virile testicular fortitude makes him immune, and so unable to have his ability to consent compromised.

Men. We really are that wonderful.

"section 61HA (6) provides that the grounds on which it may be established that a person does not consent to sexual intercourse include: (a) if the person has sexual intercourse while substantially intoxicated by alcohol or any drug" (source)

Of course, Australian law at least pays lip service to gender neutrality. We can at least hope women will be punished, however half-heartedly, for the same acts as men.

But think about this. Two people* meet at a bar or a night club, hit it off, they have sex, Alpha wakes up the next day and realises "OMG the wedding my partner will kill me I'm doomed I'm doomed... but hang on... I can say this person raped me..."

They call the cops, and sho'nuff, the other person is bundled away in the van.

"Fine!", Beta cries in Dopplered despair, "two can play at that game!"

And the wedding will have to be cancelled because now Alpha's being booked.

"But how can I be a rapist? I'm a victimmmmm!" insists Alpha.

"Clearly! 61HA (6) is unambiguous! You couldn't consent and we have a blood sample to prove it! If only your partner had thought to take one and analyse it, they could have avoided this altogether!"

"But, then, why arrest meeeee?" sobbed Alpha dramatically, wishing the usual hankie hadn't been taken away as a possible offensive weapon. To be fair, it really could do with a decent burial, but, well, sentimental attachment will have it's way.

"Well, you nasty piece of work, did YOU take a blooood sample to determine if your partner could consent? I think not! You did not know their bhhiochemical status, as it were. And it turned out, they were a bit under the weather. So it's in the klink for the pair of your sickos, wahey!"

And so our sad story ends. Truly, the only safe way to have sex is alone... although best not, what if you've had something intoxicating and forgotten about it? Presumably you can still be done.

You'd remember getting intoxicated? You think so? Like that Stilnox... you don't recall taking  it? Probably for the best. They still haven't found that banana.


*to make it interesting we don't know their gender, call them Alpha and Beta

Just noticed it was already passed, not proposed:


Even experts don't know how the new consent laws will be applied:  The Senior Professors at UTS for Law said in "Sexual Assault Law Reform in NSW: Issues of Consent and Objective Fault"

Expert evidence may be called on this issue to give the jury a further understanding of the complainant’s inability to comprehend. However, a person may be ‘affected’ by alcohol or drugs, but still be aware and capable of voluntarily consenting.

A case referred to by the Taskforce was Chant and Madden. ... His Honour said, in this regard:

"...the fact that a person is affected by alcohol or drugs is a factor to be taken into consideration in this case on the question of consent or lack of it in this way.

You have the evidence of Dr Gaffney that both alcohol and Indian Hemp, pot, marijuana, call it what you will, are drugs that affect the central nervous system and that they both have an initial affect of inducing euphoria and a feeling of well being that could result in a lowering of inhibitions. ...

Nevertheless that does not mean that a person in a state of euphoria or well being or intoxication induced by drugs or alcohol cannot consent to an act or acts of intercourse.


... The inclusion of s61HA(6)(a), however, has been controversial. In the second reading debate, the danger of including such provisions was highlighted by the hypothetical scenario of the drunk young female victim and drunk young male defendant.


So an ordinary person has buckley's of assessing whether or not someone is intoxicated to the point of not being able to consent. Even this judge doesn't seem to be very clear.. they can consent, possibly, maybe not. You do have an expert on intoxication on hand at all times for those times you feel frisky, don't you?