Tiffany Moore, a confirmed member of the Piru set of the Bloods street gang, is charged in the death of 19-year-old Felicia Hester

One traditional feminist argument is that violence and crime are caused by men; remove them and a paradise ensues. They are very good at ignoring female violence.


the story of the two teenage girls who bound 71-year-old Lily Lilley's mouth, pushing her false teeth down her throat before throwing her into a canal; the 15-year-old girl who filmed West Yorkshire man Gavin Waterhouse being beaten to death by two boys; the teenage girls who shouted, "Kill him! Kill him!" as a group of boys chased and stabbed 16-year-old Kodjo Yenga to death in Hammersmith last year. Then there was the gang of teenage girls who are believed to have posted a liquid-based bomb into the home of Charlotte Anderson in May, after arguing with her over a love interest.


Others tread the opposite path, taking on masculine traits. "For these girls," says Senior, "being regarded as one of the boys is all-important ... They don't usually sleep with the boys, but pimp for them, being paid to bring girls to them. There's not an ounce of sisterhood or compassion."

Notice how their bad behaviour here is, by definition, masculine. They excused from responsibility. The violence is because they were contaminated by masculinity.

You think that's too much of a stretch? Susan Batchelor, at the Scottish Centre for Crime and Justice Research at the University of Glasgow claims they do it because "The women's movement has not reached their consciousness."

Not because they are wicked. Not because of the terrible nature of their hormones. Not for any of the reasons that a man would be blamed for it. 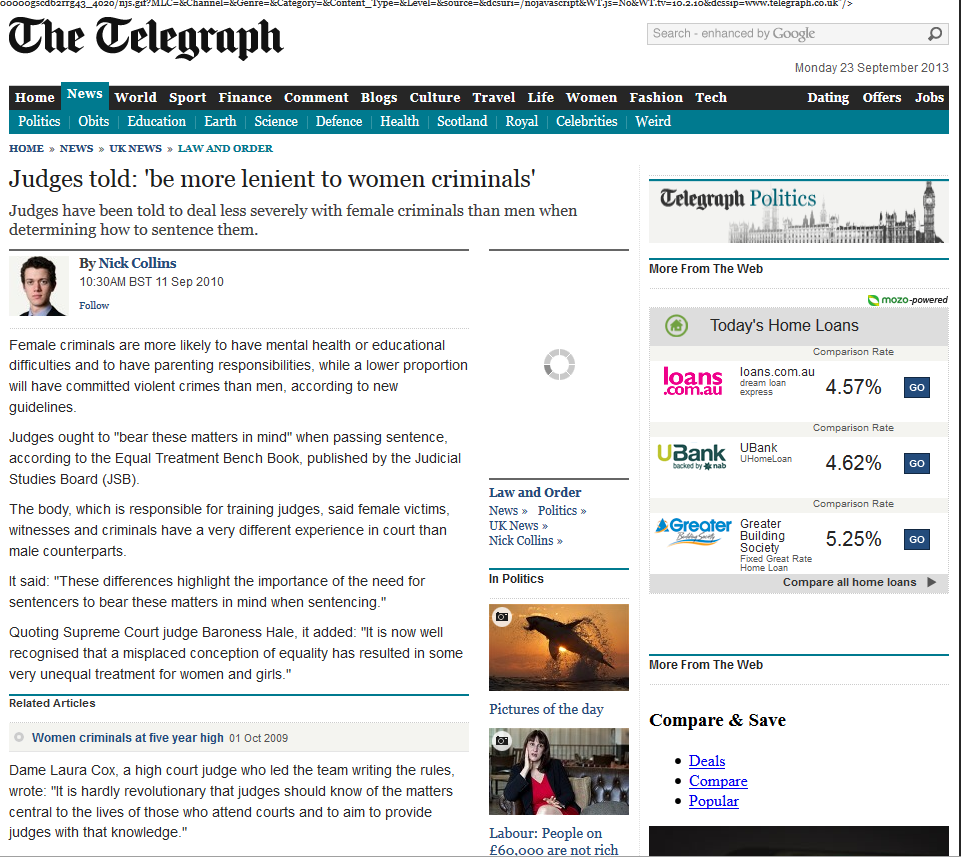 When they commit crimes, they are given lighter sentences as policy. Women should not be sent to prison and should instead serve community sentences. I wonder if this applies to female pedophiles like Jennifer Philp-Parsons?  Or hundreds of other female teachers given light or even suspended sentences? Is weekend detentions something a male teacher would face?


Surveillance video shows just 34 seconds after the girls boarded, one of the girls grabbed the Zune. When Jessica and her boyfriend resisted, the pair was attacked by the five girls, police said.
"Basically I was turned around, one of the girls hit me from the back," Jessica said. "I turned around to ask 'hey, what are you doing?' and then three of the other ones started hitting me."
She says she turned around again and was struck in the eye and began bleeding profusely.
Jessica mentioned twice that she was pregnant and said she didn't want to fight them, but she says one of them made the comment, "well, nobody hit her in the stomach."

Law enforcement personnel, when handling suspected or known female (and also male) gang members, should always use extreme caution. NEVER assume that just because she's a girl, she won't try to hurt or possibly kill you.