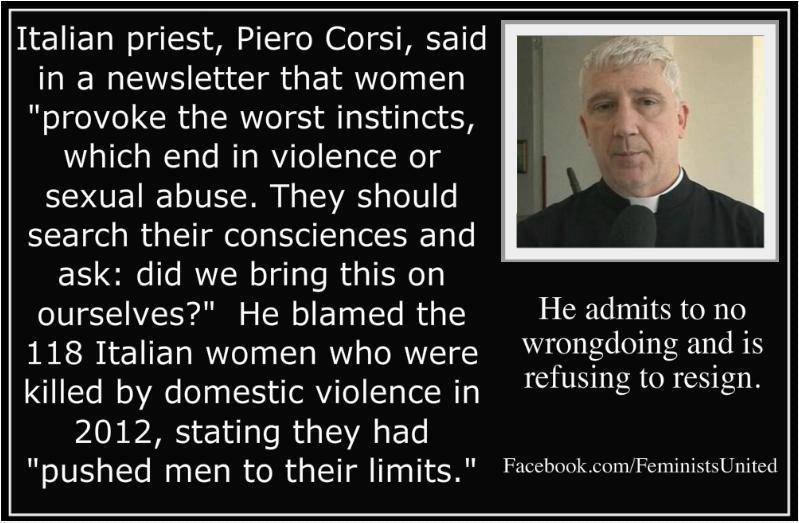 I don't know the full story but I thought it was interesting that this Feminist group automatically knew he was wrong to say anything. Yet what was it that he said? "Search your conscience... are you responsible?" Isn't that what anyone should do if there's a dispute? The group seems to have made claims that he decided all physical abuse was the fault of men; yet the quote they use doesn't substantiate it.

The narrative is clear; women are never responsible. Women are innocent.Men are wicked.

Now I do not think it's a good idea to respond to verbal with physical attacks. But think; how are men supposed to react? Men aren't taught how to deal with it, except by their fists. They are certainly not taught to recognise it as abuse, nor are there many support facilities available.

All advertising about domestic violence is targeted at women and has male perps and female victims. I don't think I've ever seen a male victim shown, or a support hotline number advertised in a journal for men, for example.

Men are also less capable at this type of attack due to our biology. Overall, women are more linguistically adept. "Females, on the other hand, tend to have more verbal fluency" (source)

Men who are subjected to this are regarded as responsible in our cultures; they are 'henpecked' and should stand up for themselves and be a man. No path to this is provided, however, except through violence.


"Verbal abuse may include aggressive actions such as name-calling, blaming, ridicule, disrespect, and criticism, but there are also less obviously aggressive forms of verbal abuse." (source)

Don't let things escalate. If you are attacked, and you respond in kind, generally you will be held responsible if you are male. It's not easy getting the law to recognise domestic violence against men, or to enforce AVOs, but there are good people out there willing to help, and it's important to persevere.

If you are sent abusive messages, for example, back them up somewhere safe, out of reach of the abuser. Try emailing them to yourself, or putting a copy on google drive.

Don't endure it. Fuck being manly and 'sucking it up'. Traditionally, men used to drink themselves into oblivion, kill themselves, or their partners, being manly. We can do better than that.

A good article on this is Women As Verbal Abusers by Michele Toomey, PhD