Why don't "Advocates for Human Rights" advocate for human rights?

The Stop Violence Against Women website (STOPVAW), a project of The Advocates for Human Rights, is a forum for information, advocacy and change in the promotion of women's human rights around the world.

So, despite being an "Advocates for Human Rights", it only functions as a platform for female power. It's not interested in human rights, only " women's human rights". There it is, on the box.

To determine the predominant aggressor, police must consider:

Well, this is easy. Men are bigger. Look for the man! Case closed! As for the fearful demeanor crap, all that means is if one party is better at lying, they are regarded as innocent.

I have no idea what they do in lesbian situations, which presumably would be dominant if they had their way. And in gay male relationships? Do you arrest both of them?

Dual arrests are to be discouraged, because two people are never to blame in a fight, that's just unpossibleeeee.

"Batterers may try to convince the police that the violence was mutual and that they are also a victim. "

Which is exactly what innocent people do, too. Feminism is about undermining the convention: "Innocent until proven guilty". "Ei incumbit probatio qui dicit, non qui negat" is negated indeed.

DV should not be treated different to other violence. Would police really arrest only one party in a brawl when both might be responsible?

I have to wonder if men won't wear google glasses constantly as a defensive measure as proof they are not the initiators of crimes. How will feminists spin that to maintain the fiction that only they are victims? 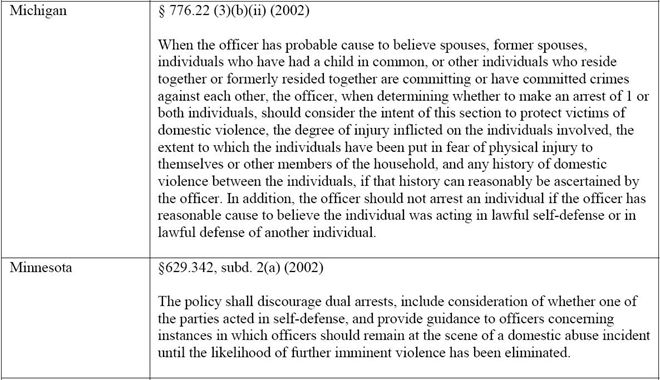 I'm also a cop. So I pose this question: Are you in one of the states that says you have to arrest the bigger(by weight and height) person when you go to a DV call? If you are, then is it fine with you that by the law(that is supposed to be blind/just) you have to arrest a 6'2 guy even though his 5'7 wife/girlfriend hits him over the head with a lamp? Or are you ok with a piece of legislation that specifically protects ONLY women because by it's definition, you can only be a perpetrator(VAWA)