A 12 year old boy can be raped, then forced to pay child support


There's some concern that Wikipedia has a Feminist editor who's deleting or editing articles that are unfavourable, so I thought I'd take a snapshot of it now and see if it is.. corrected... at a later tim.

From Wikipedia, the free encyclopedia
Jump to: navigation, search
Hermesmann v. Seyer (State ex rel. Hermesmann v. Seyer 847 P.2d 1273 (Kan. 1993)) was a precedent-setting Kansas, United States case in which Colleen Hermesmann successfully argued that a woman is entitled to sue the father of her child for child support even if conception occurred as a result of a criminal act committed by the woman.[1][2] The case was brought in her name by the then Kansas Department of Social and Rehabilitation Services.

Hermesmann was a babysitter for Shane Seyer during 1987 and 1988. When 16 she had begun a sexual relationship with Seyer when he was 12 years old.[2] When she was 17 and he 13, she became pregnant and their daughter was born in 1989.[3] Criminal charges had been brought against Hermesmann accusing her of "engaging in the act of sexual intercourse with a child under sixteen" whilst she herself was a juvenile. In the event she stipulated as a juvenile offender to "contributing to a child's misconduct" which is not a sexual offence.[1]
In 1991 the Kansas Department of Social and Rehabilitation Services in Hermesmann's name had successfully taken the father to court for child support. Hermesmann's criminal culpability was not addressed in this trial, as this was purely a civil court case. The Department also sought and was awarded $7000 for its own costs.[4] However, in the later Supreme Court hearing the Department stated it never had any intention of collecting its award.[5]

In 1993 the Kansas Supreme Court rejected an appeal by Seyer that he was not liable to pay for child support.[2] The court held that the admitted facts established that, because being under 16 he had been legally unable to consent to sex, a crime had been committed under statutory rape law. All the same Seyer had actually given consent to the acts under civil law.[1][3] The court ruled that "at no time did Shane register any complaint to his parents about the sexual liaison with Colleen".[1] The court also ruled that a mother's potential culpability under criminal statutes was of no relevance in determining the father's child support liability in a civil action.[3][6]The court stated that the state's interest in ensuring that a minor receives child support outweighed its interest in potentially deterring crimes against minors.[7]

The case established a precedent which has subsequently been used in the Kansas courts.[8] It is one of the earlier cases now cited in U.S. child support guidelines which say that in every case that has addressed the issue the court has decided that an underage boy is liable for the support of his child even when the conception was the result of statutory rape.[9]
In a 1997 case before the Florida District Court of Appeal the court's decision cited Hermesmann saying that the Kansas decision was taken even though the Kansas statute states "[A] person under 15 years of age is incapable of consent as a matter of law".[10] The court also remarked that "the Kansas court did not address the question of whether lack of actual consent (apart from the statutory definition) could form the basis of a defense to an action to establish paternity".[10] In this case also the question of whether actual nonconsent might be a defense was not before the court.[10] 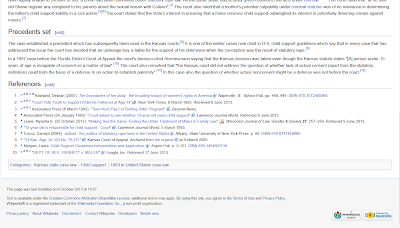