To the mothers of sons everywhere


Imagine Albert, Ethan and Anton are your three, much loved sons, and Janet is your daughter, that you raised with your husband Bill .

They leave, and travel the world.

Albert, at 16, goes to India. There, a woman decides to take him without his consent. Albert is shattered, he can't believe a woman would betray him like that, he's been so good.. he goes to the cops, who laugh at him. She didn't break the law.

Ethan, who hasn't heard of Albert's fate, is in France, hanging out with his lesbian friend. She spots some cutie walking past, and points her out. Ethan sees her now, and looks... but is seen. Ethan is charged with looking intently, and imprisoned... for three years. Inside, he will be raped and brutalised. He will learn to hate women. He will take his revenge before dying.

Anton hears of their fates. Embittered, he commits crimes with Janet, who shares his every misdeed.  He is sentenced to jail for decades, where he will escape by ending his life. She gets weekend detention and therapy.

Bill, in Europe, campaigns against these injustices - and is arrested for antifeminism. He should have kept quiet, known his place.

"You should have had girls", your friend says. "They're never any trouble".

"But what about Bill"?

"He had it coming", she laughs. 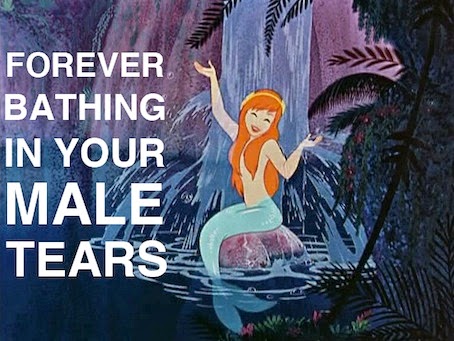