Don't believe everything you read on the internet 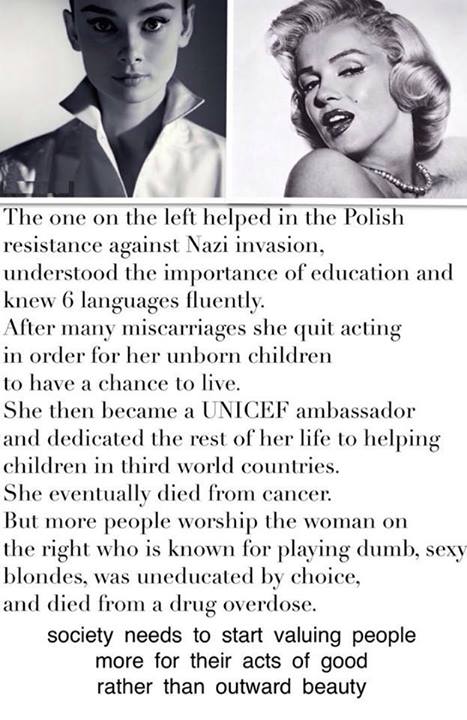 "In his autobiography, Movie Stars, Real People and Me, director Logan wrote, "I found Marilyn to be one of the great talents of all time... she struck me as being a much brighter person than I had ever imagined, and I think that was the first time I learned that intelligence and, yes, brilliance have nothing to do with education."

While Monroe was a student, Lee Strasberg commented, "I have worked with hundreds and hundreds of actors and actresses, and there are only two that stand out way above the rest. Number one is Marlon Brando, and the second is Marilyn Monroe.""

"Norma Jean Baker endured a fatherless childhood of sexual abuse and poverty and was put in a string of orphanages and foster homes after mother Gladys Baker (nee Monroe), who suffered mental illness, was institutionalised.

She was born on 1 June 1926 in the Los Angeles County Hospital, the third child of Gladys Baker. She lived with a number of foster parents, as her mother was mentally unstable, until her mum's best friend Grace Mckee became her guardian.

Mckee was inspired by Jean Harlow and allowed the nine-year-old Norma to wear makeup and curl her hair until McKee married and sent Norma to an orphanage.

She was then sent to live with her great aunt Olive Brunings and it is thought that Norma was sexually assaulted by Olive's son, which some biographers have claimed led to her later behaviour, including substance abuse."

"She applied for divorce from DiMaggio on the grounds of mental cruelty. Despite this, he secured her release from the Payne Whitney Psychiatric Mental Clinic in 1961."
http://www.thebiographychannel.co.uk/biographies/marilyn-monroe.html

"Although typecast as the "dumb blonde," an unfair stereotype that bothered her throughout her career, Monroe transcended the limitations of her image in The Asphalt Jungle (1950) and All About Eve (1950).

Working with two of the most lauded directors of the era, John Huston and Joseph Mankiewicz, she brought humanity and intelligence to her small roles in these films. Even though the studio did not consider her a serious actress, Monroe signed a seven-year contract with 20th Century-Fox in 1951.

Her grossly underpaid bondage to Fox became symbolic of the many exploitative qualities of the studio system. Monroe nonetheless continued to overcome the deficiencies of her roles, and three films showcased her dramatic abilities: Clash by Night (1952), Don't Bother to Knock (1952), and Niagara (1953).

In Clash by Night and Niagara, Monroe played darker, more demanding roles. Her Rose Loomis in Niagara is a steamy, cheating wife intent on murdering her veteran husband. In Don't Bother to Knock she portrays a psychotic babysitter. "

"She stood by Miller throughout his ordeal with the House Un-American Activities Committee, risking her reputation and career to combat the committee's unseemly challenges to First Amendment rights in its pursuit of "communist corruption" in the arts.

She likewise spoke out against the terrors of the Atomic Age, supporting the National Committee for a Sane Nuclear Policy and saying to reporters, "My nightmare is the H-bomb. What's yours?"

...According to this theory, Monroe was accidently killed by a drug overdose (Nembutal ingested by mouth combined with a chloral hydrate enema) administered on the orders of her psychiatrist. "

But what about her education?

She was widely read. http://blog.everlasting-star.net/marilyn-monroe/marilyns-library/

“Nobody could imagine what I was doing when I wasn’t shooting . . . I was going to school! I started going to classes at UCLA at night . . . I took courses in the history of literature and the history of this country and I started to read a lot, stories by wonderful writers,” she said in 1960 interview with French journalist George Belmont.

Her personal library contained over 400 books.

So she wasn't a genius?
http://www.express.co.uk/expressyourself/336626/Not-just-a-dumb-blonde

Neil Norman claims "Marilyn was dyslexic and bipolar " .. well that would make education difficult if this is true.. difficult to assess as those conditions weren't known about anywhere as much as now.

He also says she had IQ of 163 but I haven't seen the proof of it, and am suspicious of those tests anyway.

Audrey died at 73, meaning she had time to develop a scope past being a beauty; Marilyn Monroe﻿ at 36, in suspicious circumstances. At the very least, she was improperly medicated, possibly due to the ignorance of that time. That was not her fault. Audrey wasn't playing the sex bomb roles and was allowed diversity; she didn't have the crippling medical problems, which meant she could study much much more easily.

As for Audrey's war hero status? "Hepburn's parents were members of the British Union of Fascists in the mid-1930s,[20] with her father becoming a true Nazi sympathiser. "

I see no reference to it.

So why is this important? Many people are not 'beautiful' (myself included) and it's natural to be jealous of those who are. Monroe offends because she seems to be beauty and nothing else, to have had it easy, to have never tried..

None of that was true. She tried her fucking heart out.

She was trapped by a system that crushed a lot of people. Stereotyping was safe. If anything, it's only recently that actors have started escaping it.

She was also damaged by medications that failed to treat her, probably made her worse, and made her believe she was nuts when, if the dyslexia allegation is correct, her problem was one that could never have been solved by the crude therapy available.

Had she been born twenty or thirty years ago, she might not have been as successful; we don't crave sex bombs as much as we do. But she would have had support, and probably would have been an academic if that IQ result was correct. She had the drive to struggle despite a nightmarish childhood. She had ambition and dealt with constant failures by trying harder. She endured. She sought the best medical technology and expert opinion she could find. It wasn't enough. That wasn't her fault.

Blaming her for it is disgusting.
Posted by Brett Caton at 18:20