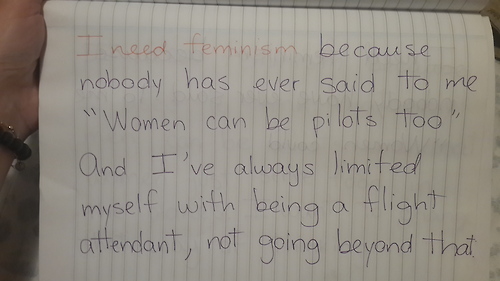 
"I need feminism because nobody has ever said to me "Women can be pilots too" And I’ve always limited myself with being a flight attendant, not going beyond that.

Because they didn't need to? Because they don't say  "men can be pilots", men just do it by themselves without having to be coddled, and despite educational systems that actively discriminate against boys? She had no Feminism to tell her she could do it. She just did it.

While you sit there whining, they're out there flying

in countries without Feminism to privilege them in countries without Feminism to weaken them

they feel their own strength.

They don't live their lives as victims. They don't sit weeping in fear of global male conspiracies. They do what men do.