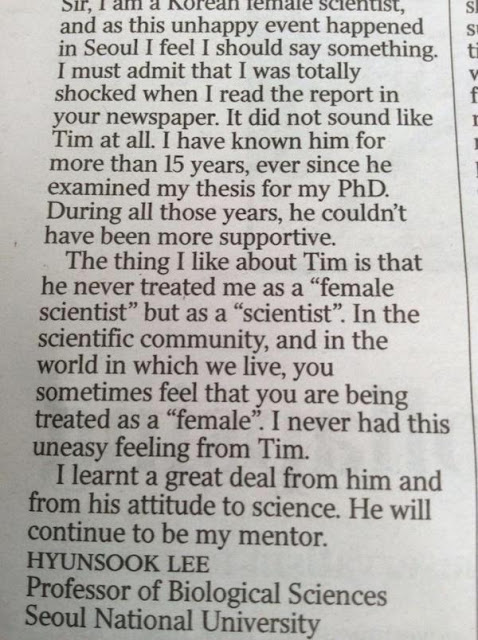 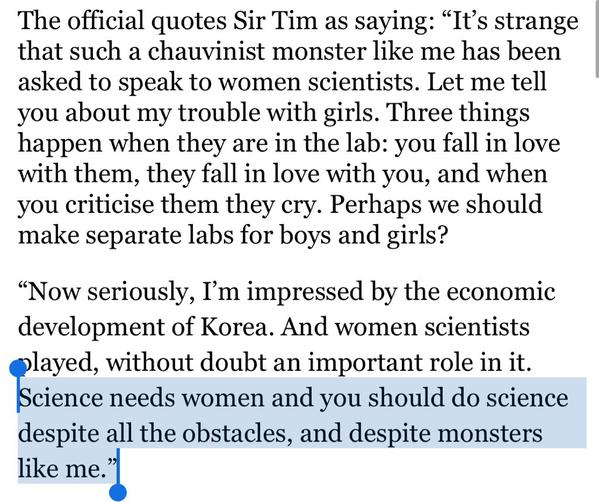 The BBC claims" Sir Tim Hunt suggested 'girls' should stay out of the laboratory because they distract men. Strangely, they seem to ignore the fact that he said that both the sexes were distracted by each other. Despair: Sir Tim's wife Professor Mary Collins (pictured), one of Britain's most senior immunologists, said the couple cried and held each other in the aftermath of the public backlash.

It had emerged earlier that Sir Tim was speaking from personal experience when he suggested same-sex laboratories would be a good idea to stop colleagues falling in love.

He met his wife, Professor Mary Collins, 56, while directing her biochemistry studies at Cambridge University.Source: http://www.dailymail.co.uk/news/article-3124358/Women-cry-men-says-Boris-calls-sexist-Nobel-scientist-given-job-back.html

However, as a result of the furore, Hunt was told by UCL that he would have to resign his honorary post at the college. “At no point did they ask me for an explanation for what I said or to put it in context,” he told the Observer. “They just said I had to go. There has been an enormous rush to judgment in dealing with me.”

Note that SocJus is spinning this as a resignation out of shame for his evil deeds, not that he was pushed. It's funny how clear they are that consent is invalid under duress - when it suits them, of course.


It’s official: men are too emotional for a career in science


I'm staggered at how dishonest this article is. It never addresses his points, and merely responds to a strawman.

So what did he say? It's difficult to be precise as no-one seems to have the original transcript (the youtube video I had linked seems to have been taken down).

He says he has no dispute with these quotes.


“let me tell you about my trouble with girls.”

Hmm. You know who else says that? MOST COMPANIES HR DEPARTMENTS. You can be sacked in some places for them.

And who runs the HR departments?

So feminists say they are bad - and when they say that, that's terrific! That's the natural wisdom of a Sister!

But when he says it? It's just a stupid old white man talking. Vilify him!

What else did he say?

2) Crying in the office is bad.

Professor Ad Vingerhoets of Tilburg University, famed as an expert on crying said "it is true that women cry more often than men, it is a scientific fact.... Studies show it can cost people promotions if they cry at the work floor.”  https://universonline.nl/2015/06/15/tiu-professors-research-used-to-defend-tim-hunt

People who can't cope with stress are a big problem. At my old workplace, which was a call centre, thousands of people managed to cope with criticism every day - it was mandatory for our performance evaluations.

We seemed to have done so without crying.

If the women are crying in his workplace, I'd say that the likely reason is not distress but because it's effective at manipulating people.


" if an employee cries because of an action by management or disciplinary action, in retaliation they might  complain of sexual harassment.... Not to be cold, but there can be legal exposure when you get involved in your employees’ personal lives."


Now, you don't provide counter evidence - indeed, the main argument I have heard is that crying is good and men not doing it is why they kill themselves in ever increasing numbers (and it couldn't have anything to do with the fact men are now vilified for being men, like he is).

So the science seems to agree with common sense; women, generally, cry when criticised. Men don't. But SocJus doesn't give a damn about Truth - and if they control Science, Truth will be shown the door.

3) Feminist have argued for sexual segregation since the 1960s.

If he is a chauvinist for arguing for it in one tiny part of the workplace, then what does that make feminists when they argue for an entirely separate existence? A gender Apartheid?

Feminists, of course, ignore that bit and claim he despises all women everywhere. This is called projection.

They hate men so much that they cannot imagine men do not hate women in the same way.

As I said there (before she blocked me for pointing out her hypocrisy):

"But you ignore the fact that office romances are banned in many places BY WOMEN - you have no problem with that.

The only time SocJus objects to it is when a man points out it's a problem. How dare he have an opinion! Destroy him!" 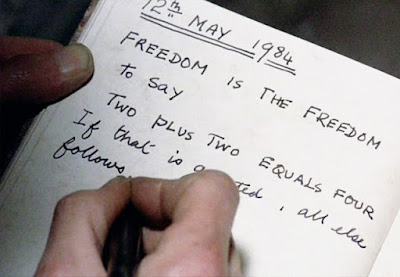 A very flawed accuser
New evidence emerges that his accuser has a history of deceit,


The Witch-Hunt of Sir #TimHunt : The Changing Story


Women do cry. Feminist role-model Sheryl Sandberg herself said, "I've cried at work." But it was Mr. Hunt who was Bunsen-burned at the stake.

By contrast, the Globe and Mail newspaper recently published an essay espousing the "Male Idiot Theory," stating that men are more likely than women to risk life and limb. No men cried as a result, to my knowledge, nor did they call for the female author's head.


Tim Hunt and the danger of the Damsel Bias


As the full story of Nobel laureate Tim Hunt’s allegedly sexist remarks begins to see the light of day, it becomes more and more clear that his “chauvinist monster” bit was actually a self-deprecating satire aimed not at women but at men.

The Tim Hunt Reporting Was False. Royal Society, Please Give Him Due Process

The tape that shows Sir Tim was wronged
Posted by Brett Caton at 23:41