Feminists wonder why MRAs won't just shut up and kill themselves


"After forcing myself to read the entirety of the Vice article “Women of the Men’s Right’s Movement,” my brain is bubbling with so much anger and fury, I think it may just explode. "

It's a terrifying experience for a fanatic to encounter unbelievers, but even worse for bigots to encounter people like them who just won't hate like they do. Feminists call them 'gender-traitors'. Not sure how that will win them back, but whatevs. 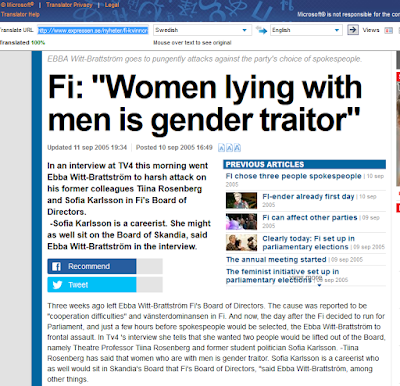 "this is the actual definition of feminism"


No, that's the definition you've decided to use, and it has no authority.

Past definitions were different. the fact that feminists have seen seen themselves as innately superior to men - and were not chucked out by your movement - indicates that your definition has the same credibility as a North Korean definition of Juche as "best possible political system".


Ah, gotta love that weasel word - basically - because you know the strawman definition you are using isn't one that can be cited. It doesn't exist, MRAs certainly don't agree on a definition of it, and you are a liar.

But I will say one thing. If someone does hate men, are they more likely to be a feminist than not? In fact I can't think of any movement that has a greater percentage of man-haters, or that has the term "gender-traitor" to describe women who sleep with men as the part of it's formal political platform.


I can't think of any. Even neo-nazis pretend not to want genocide.

"men (specifically cis, straight, white men) have pretty much all of the power in our society"


Yet feminist policies are enacted under law. Sounds like the 'Patriarchy' doesn't exist, and we have what are known as 'democracies', which largely answer to lobby groups - like Feminism.

I had a look to see if you actually addressed any of the points you listed - anxiety about "Listen and Believe" meaning that men are automatically assumed guilty when accused - which was put in place by feminists - or about the Tender Years Doctrine - which still echoes in legal practice, even tho' it's supposedly been abolished.

It's not convenient to acknowledge them - ergo, they don't exist in your mind.

" Both the men and women involved with the MRM are doing themselves a great disservice by demonizing those who could potentially be their allies."


We ARE allies with feminists - but the feminists on our side aren't obsessed with Patriarchy and Toxic Masculinity. In fact, I believe a better description of them would be Femalre Rights Activist - but Camille Paglia and Christina Hoff Sommers think Feminism can be reformed. We will see.

As for the rest of you Feminists, you bitch endlessly about how persecuted your are by men - but never do what anyone else would do under persecution - leave and set up your own damned country.

You just sit around holding your breath until Daddy buys you the latest iPhone.


You have no idea how rich that is coming from you. http://brettcaton.blogspot.com.au/2014/08/argument-by-dictionary.html


"Why I am no longer a feminist", by Christine Damon
http://brettcaton.blogspot.com.au/2015/04/why-i-am-no-longer-feminist-by.html