I know an old lady who swallowed a fly,
I don't know why she swallowed the fly,
I guess she'll die.

I know an old lady who swallowed a spider,
That wriggled and jiggled and tickled inside her.

Sanctuary Hills. As you can see here, trying with ghouls (slow zombies) and raiders on easy worked fine. But the bodies never disappear. 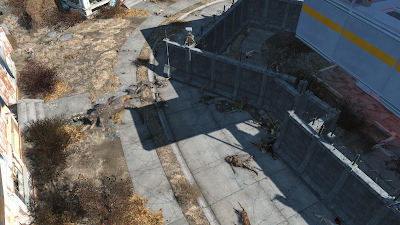 I start an invasion with the Institute on Insane difficulty. 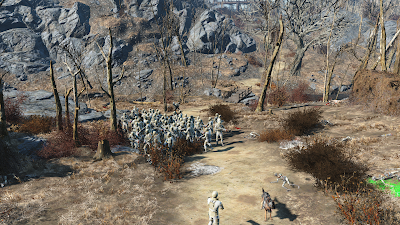 The less advanced synths attacked, the coursers attacked if i said hello, and the rest just followed me like a rabid fan club. Dogmeat knows better than to stick around when stuff like this is going down.

So I figured, hey, maybe I can use a spider to eat the fly! I spawn the Brotherhood of Steel. Vertibird and Giant Robot attacked as expected.. then the rest of them just followed me around as well.

And no, no fighting. 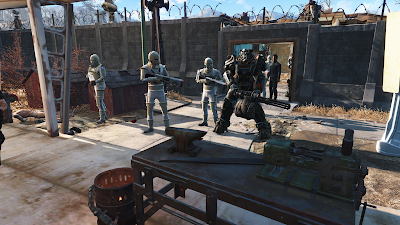 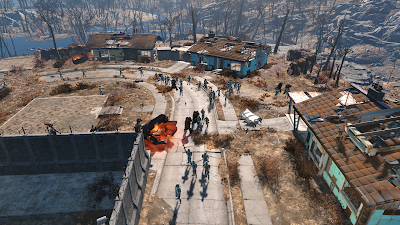 That's me in the black helmet with a sniper rifle on my back. Also, Jetpack. Don't leave home without it. 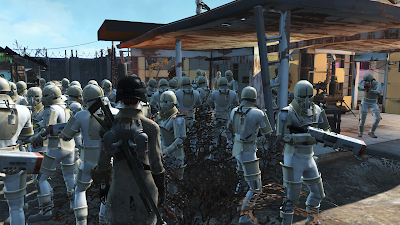 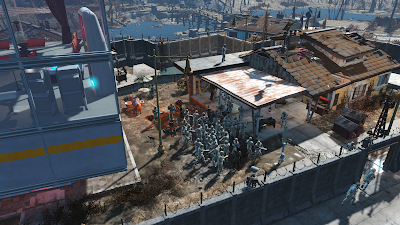 I wonder if I can sell them souvenirs?

I walk off. Previously I had fast travelled and waited at other settlements. Today I think I'll see how far they follow me. 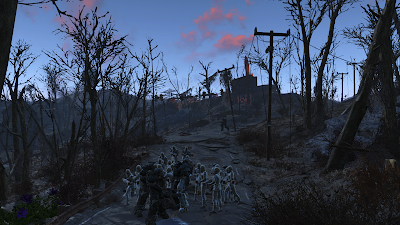 Past Red Rocket... I just wish an enemy would lob a grenade at me, to see if they are passive, or will fire back. I'm in powered armour, without the minigun.

Concord... kinda wishing I could skip right to invading the Institute. Surrender, for I have reprogrammed your army against you! Or at least find some bloody super-mutants; their area of effect attacks should trigger a hostile reaction, surely? 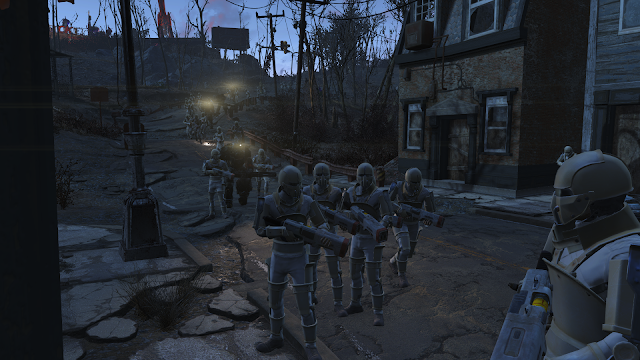 It looks like some raiders have spawned in Concord. It's not going to be their day. I want to emphasise, the army beside me is not under my command. They just like my company, I guess. 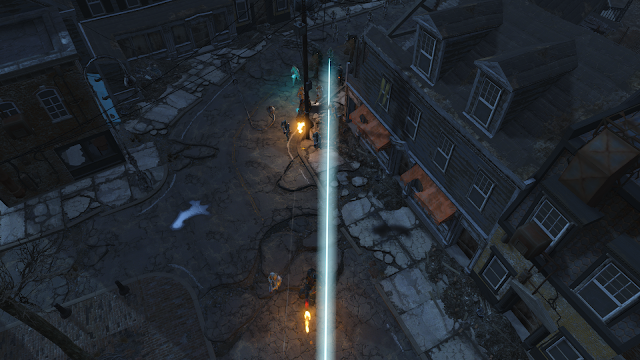 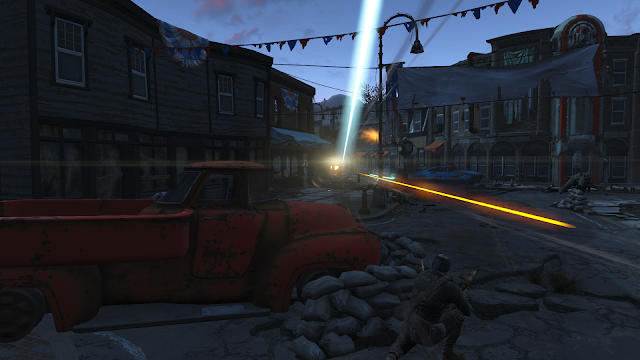 You can see the original Deathclaw's corpse here. They really need to get the garbage collection better organised. 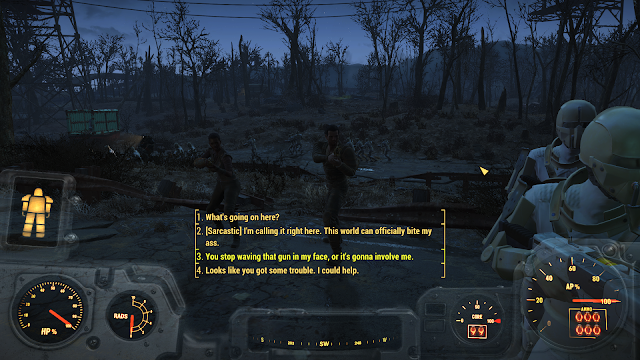 
Of course, the fan-club only makes it even more hilarious. Like challenging the Chinese army to a duel. 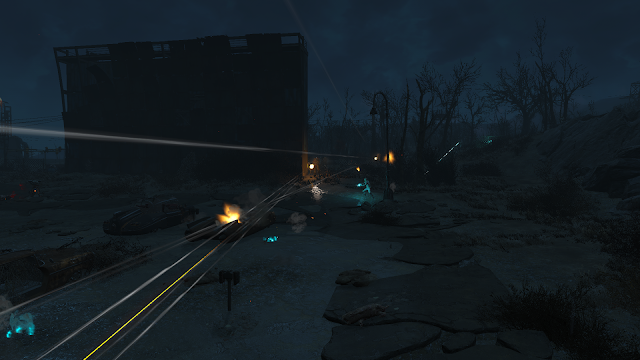 I almost feel sorry for them. 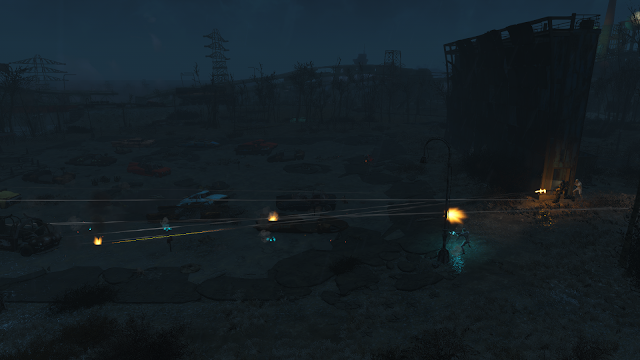 All the way to Corvega now. I really hope these guys aren't set to essential; I haven't seen any bodies yet, but let's face it, most everyone is embarrassingly puny compared to them. 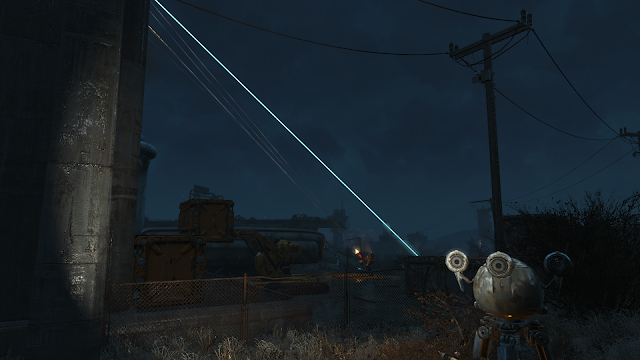 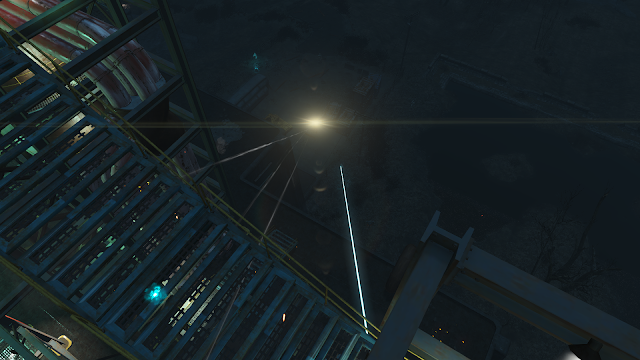 From the perspective of the raiders. 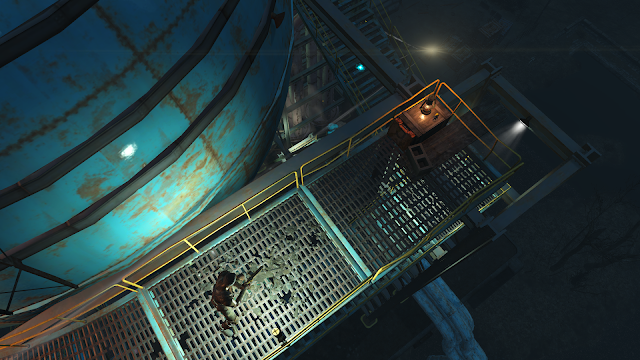 Yes, unnamed raider, I'm sure you are adequately equipped to take them on!

I bumped into some gunners around a tank, which they ignored. The gunners started neutral - then attacked. I'm always disappointed with that aspect of FO4; so many of the NPCs are mindless.

You'd think they'd try to negotiate, maybe even have an option where they can be talked into joining the Minutemen - some gunners are ex-Minutemen and an offer of an amnesty could work.

As terrible as their deeds, there are worse creatures, and maybe under the rule of law, they can become productive citizens instead of dangerous militias. It happens, historically.

I bumped into the alien. They zoned into the cave and shot him down. I wasn't sure they would follow me into dungeons. Neat! 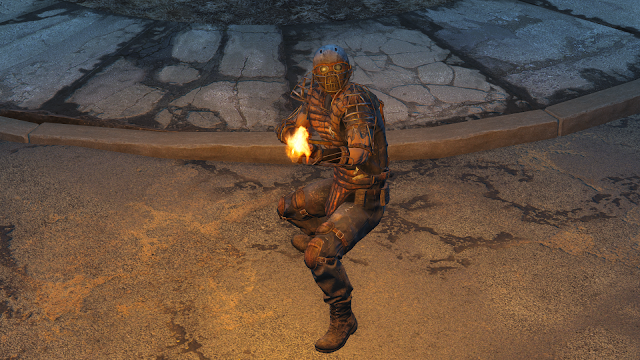 Diamond's city's finest is under attack from Super-mutants! 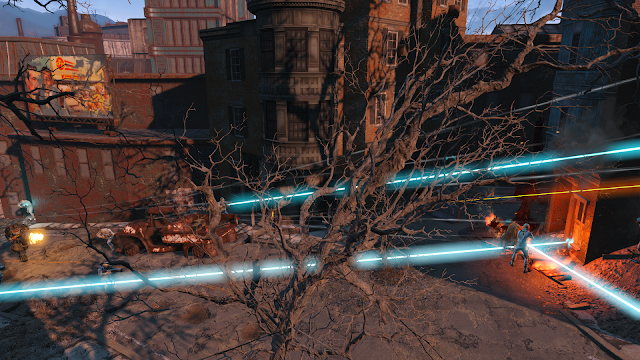 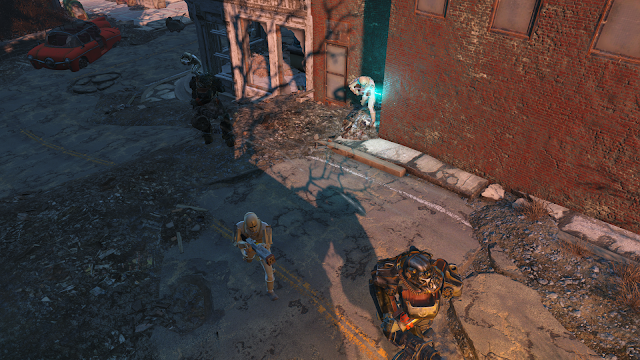 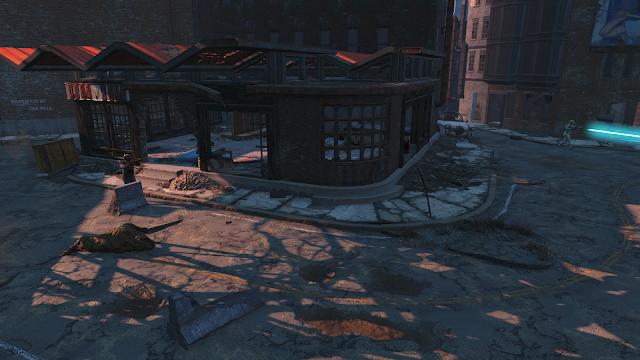 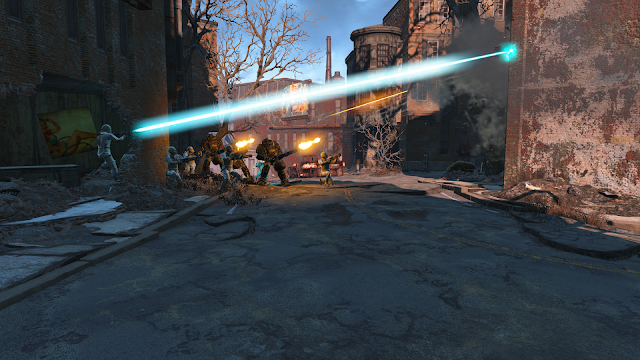 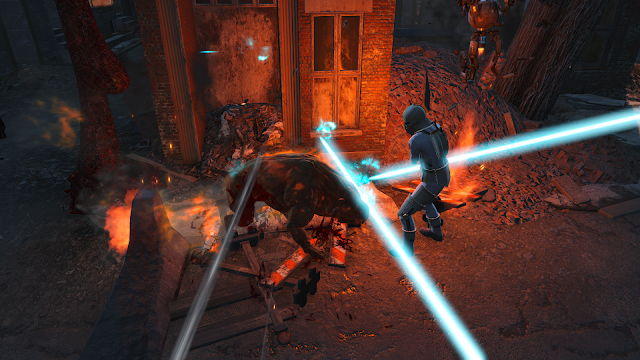 I find synth bodies afterwards - at last, the war is taking it's toll. I mourn for ye, oh my brothers of silicon.

Diamond city guards then snark about me not helping.

There's no pleasing some people.
Posted by Brett Caton at 09:43