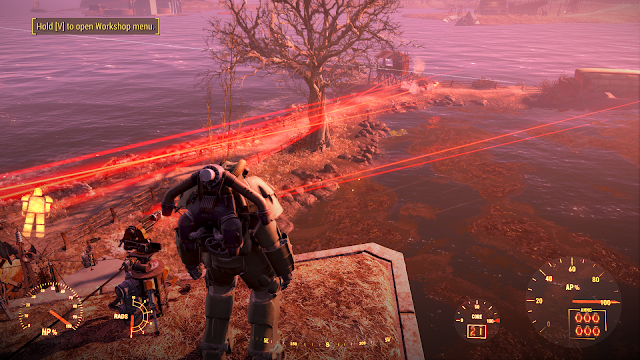 The Institute? You come to my town 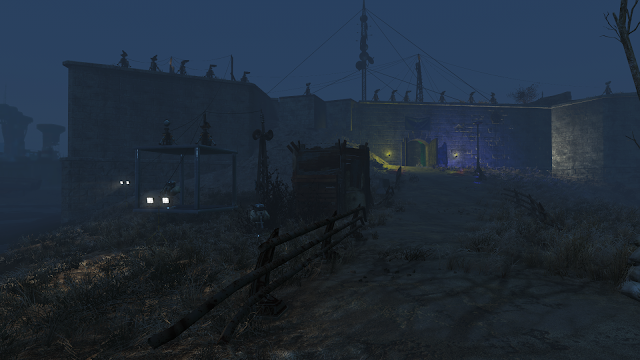 - to mess with my people? 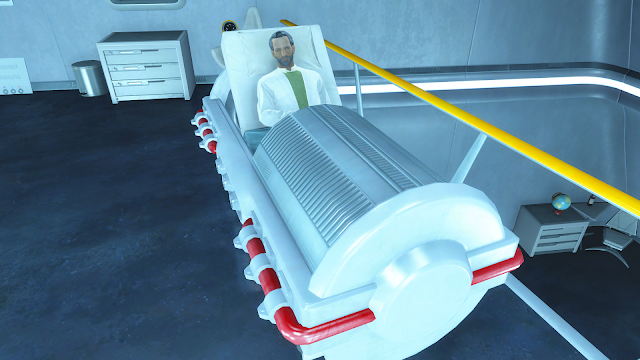 Shaun: "You've doomed Humanity.. there's nothing more to say".
Me: "Why don't we talk about it later?"
Shaun: "There's not going to be any later. I will die here with my work. Thanks to you."

Shaun: "It's impossible. I am dying of cancer. This Medibed - using technologies your simple mind couldn't begin to comprehend - is all that preserves me now. Even if you could get me out, there's no-one living out there with medical expertise". He sneers as he says it. As if he'd rather die than be wrong.

Me: "Son.. I have teams of medical robots, I have a medical expert who studied medicine for two hundred years, and people who have had to deal with more cancers that you can conceive of due to the radioactive hell-hole they were born to and thrived in.

I have a suit of powered armour that lets me carry ten times the weight of that bed, and I have a teleporter able to take us NOW."

Shaun: "It's just impossible to do anything. I will die here blaming you. There's nothing else to do".


The lights on the bed change, and an alarm inside it sounds as it moves into emergency auxiliary supply -but the whole world warps around us.

My medical team - well, the organics amongst them - are shocked - they expect only the worst casualties to arrive here. Icehouse. Vault 111. The worst place...the worst place.

It would be easy to go into shock here, but I hold on.

I'm not going to fail.

I won't lose him again.

"GET HIM IN NOW". A familiar voice. I'd forgotten I'd sent her here.

They are too slow to respond - none of the doctors here are from the Institute, and they haven't seen that life support system before - but their guard - the speaker - has.

She sprints, dodges around them effortlessly, a spirit of grace and power. 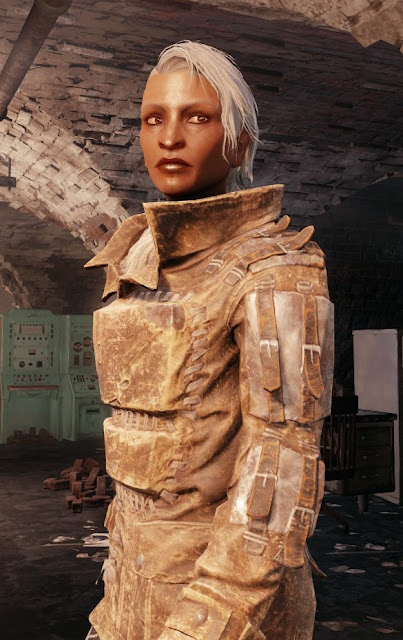 Shaun's eyes widen as she approaches. He ordered her death. He knows her reputation.

Her face is rigid, controlled rage, but her movements are almost gentle as she bundles him in her arms. She's far stronger than a human - she was meant to be a Courser, after all. An ender of life, all life, but that of the Institute. 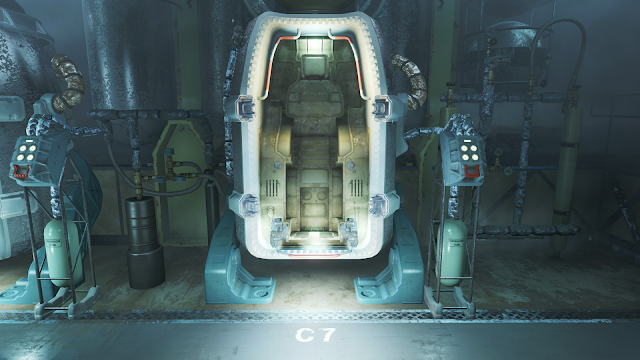 Glory places him in, and walks quickly away, fists clenched, knuckles protruding. She doesn't altogether trust her hands not to snap his neck.

The cover closes, the frost covering him <flash>, as before - but his father's arms are not around him this time.

The wound to my husband's chest are beyond repair now, yet the cryopod holding him in suspended animation still worked, and as the saying goes, you're not dead until you're warm and dead. 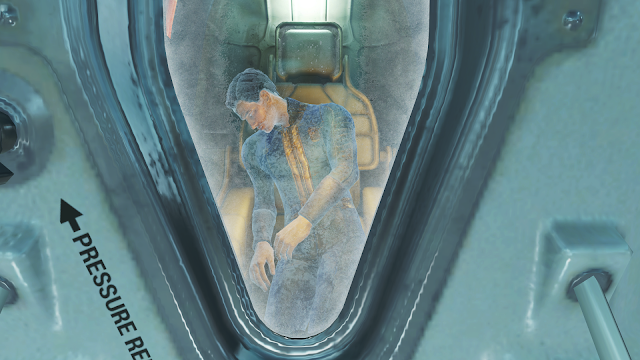 If it takes a month or a year or a century, I'll here with a cure for you both. I'll fight my way through time as I did the wasteland.

Hold on, my family.

I'm coming for you.

Seriously, Fallout 4 is a lot of not being able to do anything. It's the opposite of a good RPG - you are rail-roaded all the time along a negative path. You are informed that you have failed - even in situations you have overwhelming advantages that should make your failure impossible.

And you are just along for the ride, which is fine if you like shooting things in the head, not so good if you like ... helping people!

Now, I get it - they ran out of time, or out of money, and had to get an ending fast. But in a good RPG, you have levels of success. A decent player can get to a tier - but maybe not the perfect ending.

But the Perfect ending should be there - hard to get to, but with replay and luck and skill, it has to be attainable. It has to be a struggle - and worth that struggle.

My character is level 101. Their knowledge of science is at maximum, their intelligence is superhuman, the perks include the abilities of a ghoul (or a child of Atom?) without the necrosis, they are the General of an army and have contacts in a secret hi-tech organisation ...

I have the implants Kellog had that let him live over a century and appear young - and I have the capacity to improve upon those.

Unless I'm hit with a nuke, or just stand still and don't fight back, I will win every battle I am in. You remember Sauron?

Yup, it's like that, except without the weakness of the ring.

And yet, because of the game mechanics, I might as well be a boiled egg for all the influence I have over the game. People keep saying "modders will fix it!", but the problem is, I've seen this before. The endings for these games are really hard to change because of the way they are coded.

Did you wonder what choice to make? One of the key questions of the game is: are Generation 3 Synths deserving of human rights. Now, there's only one that you get to know to any degree - and she seems like she'd make a great companion!

She's the only Synth who has retained her memories of life under the Institute. She's the sole proof of the personhood of the people the Institute uses as things.


Glory's death is scripted, and thus will happen regardless of any action that the player takes. Even if you prevent the Brotherhood from reaching her in Precipice of War, she will still go through her death speech, and die, despite being at full health, and standing upright when speaking with her.


The reliance on voice acting makes them loathe to make changes - that's a hundred thousand dollars or more committed to the lines, whereas if it was in text - the way they used to do things, it's trivial to change it.


(Mind you, some of the voices are terrific, and having voiced sections to play really adds oomph)

Fallout 4 should be a good game - but it's just ok. No-one will remember it. And that sucks, because it could well be the last in this series.


They've alienated a lot of players, by neglecting the interface for the PC players, by having buggy and irrelevant settlements, but all that can be overlooked if you just give the game that epic ending.

The slog to get there might be a hundred hours long, but if the player saves the day, that's what they'll remember. 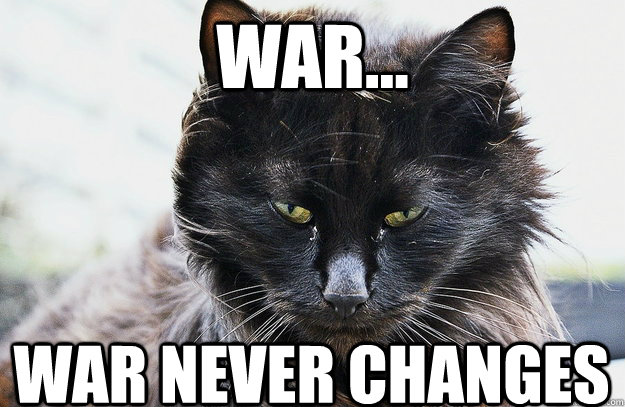 Maybe it's time it did.