Is there any easy was to get a dump of mods in text form?

Hmm, way too many unless i have multiple screenshots. Probably the best are


I looked back on it and i can see they modified mods from FO3 to make the settlement system, but seemed to have no idea how to tie it in to the game.

Because they have the focus on a 1st person shooter, they don't have a grid layout for item placement, snapping sucks, when you build unmodded stuff it all looks old because they are just re-using art (which makes no sense, you are creating new things, why wouldn't we be able to fix a roof especially when rain is dangerous in this environment)

I could go on.

Maybe the GECK will allow the settlements to have the effect in the first place - the settlers armour value and attack value should add to the defense rating of the settlement. Sure, raiders will attack anyway, but less and less as they are beaten. Then the attacks will escalate from your other enemies. Ideally, you could have other players raid too - because no AI will match the sneakiness of a human. Besides, humans actually have less ability than an npc because humans can't just warp over walls because you aren't in the settlement at the time.

I can't count how many times I've found power generators damaged when there is no physical way a raider can get to them without blowing down walls.

Settlers should die in those raids - settlers with individual names and randomly generated appearances and with random personalities. That way, you can feel some connection. I'd like to see a graveyard full of your early failures - and cribs filling with your later victories.

How I would change it


You should be able to reclaim the commonwealth - every damned piece of it.


I would pay for DLC that let me find a peaceful solution to the game - i HATE the fact that my skills don't matter except to make me better at killing things. My science skill - only for weapons. I can't cure FEV, even the one strain I should be able to.

I can't persuade the Institute members to change their attitude - to move away from a police state - even when the scripted dialogue makes it clear some are ready for that approach.

And the Brotherhood seems to be aching for a genocide as well, of ghouls like Hancock, despite the fact that they have a LOT more personal contact with wastelanders - the isolation of the Institute members makes it reasonable that they dehumanise outsiders, but it's hard to fathom why BoS is so blind to anything but their ideals of Racial Purity.

The Railroad? Only exists to serve synths. Once the Institute stops making synths - they have no reason to exist. Desdemona openly says that wastelanders are scum - despite reprogramming synths so that they become wastelanders.


And the Minutemen - don't seem to able to do the one thing that they are supposed to do - help each other. Instead, unless you use a mod to disable Preston's repeating requests, they will constantly ask you to drop everything to defend them - even if everyone of them has BoS quality gear and turrets out the wazoo. 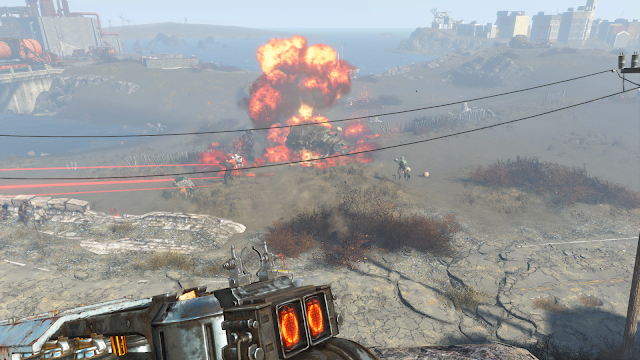 A Mire-Lurk Queen - one of the toughest creatures in the game - followed me back to a settlement without my knowing.

Bad idea. My settlers are equipped with the best gear i can find. My turrets can take down tanks. And i have dozens of places just like this.

It was dead before I could aim my gun.

Yet the game still registers that settlement as helpless if I am not there?
Posted by Brett Caton at 20:51