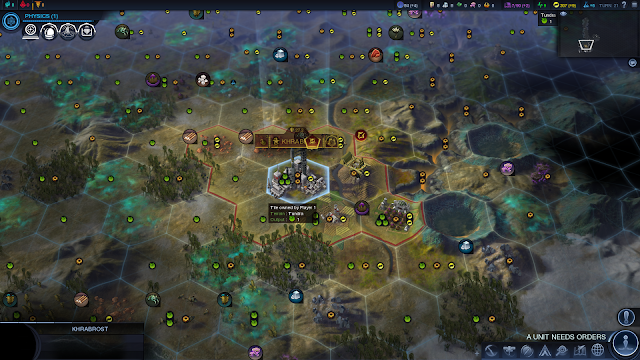 1) Re-launching satellites in Beyond Earth seems needlessly tedious. Just give them a maintenance cost and an option to disband.

2) In-game quotes are bland beyond belief - they really should have hired a decent writer or not had it in the game at all. Compare it to Alpha Centauri, where the quotes can be compelling and establish the characters distinctly.

So many little voice clips - what a waste of money if what the script the actors are reading is pointless and dull.

3) Interface is really unfriendly - i hate to think how new players could survive it.

4) Randomly being killed by aliens is incredibly frustrating. Had a siege worm spawn early in the game and roll over everything. Because "random seed" wasn't checked, going back to an earlier save wouldn't help. A new player would just struggle futilely. At least I knew I had to start a new game.

I think early civ games sometimes had that happen with barbarians - but to give you an idea, the siege worm is tougher than any unit you can potentially build EVER. Whereas in civ, the barbarians were around your level but they might outnumber you.

Why did they think that would be a good idea? What play tester thought "hey, being annihilated slowly despite any possible response is fun!"

This is at the easiest possible setting, mind you. I presume at higher settings, the game just drops asteroids on you from orbit.

You are advised aliens act as a hivemind. If you attack any of them, they all attack you, so the guide says not to attack them.

But they will attack you out of the blue. Then they are angered if you respond?

I'm very dubious of the idea that the hivemind would over-react like that. Wouldn't it either not attack, or attack as a co-ordinated effort?

Otherwise it's more like a feuding clan - if any of it's members get drunk and start a fight with some innocent traveller, then the whole clan will pile on to 'avenge' the slight.

Which is stupid, and which is what led to wars of genocide.


5) It disables screenshots. Why? It allows me to screenshot to Steam but not to the clipboard. Grrr! Found where it was putting the Steam screenshots - they are in .tga format. What? If they were jpg or png, i'd understand it. TIF would also be sensible. But who uses .tga?

6) I often get messages like "a unit needs orders". It doesn't tell me the name of the unit, or it's type, or highlight the unit. So i'll click on the map and BOOM it makes the unit run to that location by the shortest path - which can be via poisonous miasma or enemy units.

Then after it's committed to that folly, it then, and only then, tells me what the unit is supposed to be.

I presume it's a bug, but there's no clear way to report it and when i deal with tech support, they usually tell em to try restarting the game etc rather than escalating the bug to people who might fix the problem - or at least telling me it's a known issue and there's nothing to be done about it.


Confirmation! No UI when a unit selected.

" After launching the game and activating mods (so after the "Configuring game files"-Screen) go back to the mod-screen once (aka press Escape), then press the 'Next'-button again -> it well then work for the rest of the session, even when starting new games.


The solution is to load your game, then exit to the main menu, then load the same game again. Why that works I have no idea. And no it has nothing to do with mods."

7) I don't like some Civ V elements that frankly should be abandoned.
a) City placement is awkward.  If a city is completely inland, or on the coast, or entirely at sea, then it has advantages - however, most of the time that isn't possible so you compromise by trying to get around the point where all resources will be accessed (i.e. 6 hexes away from each other) and if the good spot happens to be on a resource - it's destroyed, which is the opposite of early civ games where it was protected and developed immediately.

By putting the city on the coast, I can access vital buildings. But then it's too close to the city to the south. The game advises me to move one hex in - thus blocking access to key infrastructure. Why? I don't think it's ever been revealed why the game makes that decision.

The other location is much further to the north - but if i chose that, i lose access to the oil field to the south east two hexes of my current colonist. That's vital!

It bugs me that I can't build a port slightly off the city centre - which is what real cities do all the bloody time.


b) stacking is impossible. Limiting it makes sense - removing it makes the game broken in a lot of ways. We are playing with tiny people on a gigantic planet - but they can't exist within a thousand miles of each other? That's rubbish.

It was a bad decision, and it could have been abandoned, but they just seem to be doubling down on it.

2) Artwork assets are terrific. Zooming close on HD has me going gooey over the water animation, for example

3) I like some of the ideas like the virtues and so on that let you individualise whether you produce food or science - although i'm not sure that's there's much difference really, since food lets you build scientists.

Perhaps there is and it's clear to an advanced player, but as a newbie, I don't really have a guide as to whether to pick all the choices that are similar or diverse... it's not like i get a projection of the results.

4) The way artifacts work is intriguing - you can trade in straight away or go for a set. Not sure if the sets have to be from diverse elements for maximum effect.

5) Trade looks interesting although i don't really have the hang of it. I like the idea of just being able to select the city i want to trade with, rather than guiding a unit to the city (which took a lot of my civ 1 playing time!)

6) The animation of the character portraits is especially good (yes, i've done this in point 2 but it was worth double). Because of the lack of characterisation, I don't feel connected to them emotionally, but I can appreciate them aesthetically. Arshia's a babe. Oooh yeah!

7) The Virtues system is an interesting game mechanic, and i hope to play a game where i collect them all - i presume that's forbidden, but it would be nice to try!

Email ThisBlogThis!Share to TwitterShare to FacebookShare to Pinterest
Labels: Beyond Earth