Clementine Ford demands others pay for her dreams 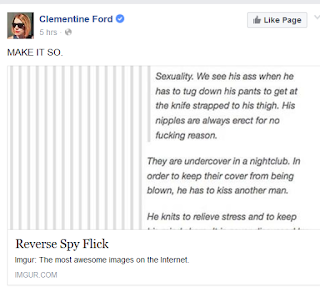 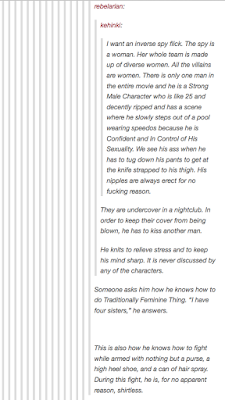 ... and that is so deeply representative of current Feminism.


Feminist has a business idea that counters the current wisdom, that everyone else says will lead to disaster, but rather than invest her own money into a capital venture, which will lead to losing it if she's wrong, she just demands everyone else pay for it and if they don't, it's proof they hate all women everywhere.


Don't talk about it, don't tell others to do it, do it yourself.


But they never will.

Oh... maybe that's not true... what about the movie "Felt"? The one where a female serial killer mutilates and murders her way to the applause of the Feminist audience?


Because killing men is a-ok (but if you say feminism is man-hating, that's misogyny, you rapist!)

Notice how all of the Feminists there whine that Hollywood should make movies they like for them. None of them are interested in making it themselves, not even contributing via IndieGogo or writing a script.

At least the makers of "Felt" put their money where their mouth was - well, that, and taxpayers money!

And if you try to explain that they can actually make movies - there are ways to do it cheaply, to market it and distribute it without cinemas - they just attack you. I had one commentator saying I was the wrong sex to give them advice.

Remember when Feminism was opposed to sexism? I think of all the women who were strong, independent and honest, who marched at my side - and they are all gone now, replaced by this pack of giant babies.


Clementine Ford, the ABC's favourite Damsel in Distress?
Posted by Brett Caton at 04:32