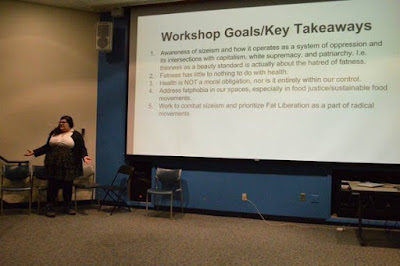 1) Awareness of sizeism and how it operates as a system of oppression and it's intersections with capitalism, white supremacy, and patriarchy i.e. thinness as a beauty standard is actually about the hatred of fatness.

2) Fatness has little to nothing to do with health.

3) Health is NOT a moral obligation, nor is it entirely within our control.

5) Work to combat sizeism and prioritize Fat Liberation as a part of radical movements.


These people are insane.

There's no such thing. Fat people are physically different and more likely to be sick, obese people die as a result of it. An employer who doesn't want to hire a fat person isn't being mean, they are trying to maximise profits. No-one owes you a job.

"and how it operates as a system of oppression"

Ok, you believe you are oppressed. Why don't you flee your oppression and start your own country, based upon your principles? 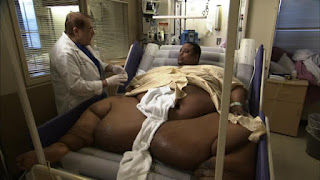 Could it be because you cannot physically move without assistance? Could that be it? So the people telling you that being fat is bad for you are not just being mean?

"and it's intersections with capitalism"

You really think a Communist State would indulge you?

Chinese journalist Yang Jisheng concluded there were 36 million deaths due to starvation, while another 40 million others failed to be born, so that "China's total population loss during the Great Famine then comes to 76 million."[6] The term "Three Bitter Years" is often used by Chinese peasants to refer to this period.[7]

"Don't buy any meat if you don't know where it comes from," one Chongjin woman whispered to a friend, who later defected and recounted the conversation to the reporter Barbara Demick for her book, "Nothing to Envy: Ordinary Lives in North Korea."

Fear of cannibalism, like the famine supposedly driving it, spread. People avoided the meat in streetside soup vendors and warned children not to be alone at night. At least one person in Chongjin was arrested and executed for eating human flesh.

So those asian men who prefer petite asian women are actually secret white men plotting against them! How fiendish we whities are!

Do you know the expression “ぼんきゅぼん (Bon Kyu Bon)？” Well in Japanese it’s kind of like onomatopoeia but not exactly. This expression is used when talking about a woman’s body shape. The first “bon” symbolizes a large bust, “kyu” means having a small waist, and “bon” means having a large curve at hips. Bon kyu bon is the Japanese equivalent of an hourglass figure.

2) Fatness has little to nothing to do with health.

The entire medical establishment says this is idiocy. But lemme guess, the doctors and scientists and nurses and every expert under the sun is secretly plotting against you...

3) Health is NOT a moral obligation, nor is it entirely within our control.

Morally, we are obliged not to cause pain to others in the pursuit of our pleasure. If you have to be carried about, you are a burden on others. You are making yourself ill, so hospital resources et al must be devoted to looking after you rather than someone who really can't avoid their fate.

Unless you are being force fed, it is under your control. You are responsible for yourself. It's not mind control rays from the Patriarchy. There are medical reasons that make it easy for some, hard for others, but just because it is hard doesn't make it impossible. Only your delusions do that.

The universe doesn't give a fuck for your sense of entitlement.

There are many causes for obesity, and many cures, some far better than others. In fact i guarantee everyone will lose weight - through diet, through exercise, or through death.


Feminists hate Pilates, too - I guess exercise is fatphobia!