It's [current year] and opposition to my group is still a thing?

Looks like the Feminist deleted the post I was responding to so I thought I'd chuck it here anyway. 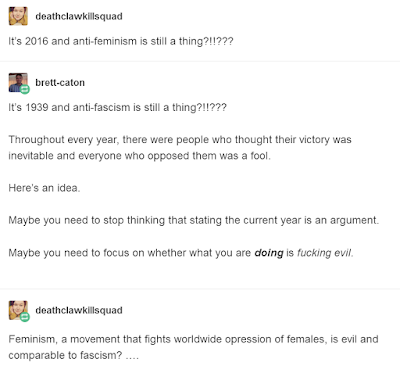 “ Feminism, a movement that fights worldwide opression[sic] of females”


A movement that fights for the right to pay men less for the same work as women, and wins that right in Australia - yet celebrates and embraces Islamism - is not something that gives a toss about oppression, only it’s own fucking self-interest - and it manages to fuck that up as well, because the Islamists will not be any kinder to you than they are to us.


Passive-aggressive feminist bitching
Coward. Ahhh, but your contemptibility is useful. It reveals your true nature.

The mask peels back and the maggots squirm.

And you recruit for us.

“Why I am no longer a feminist”, by Christine Damon

“ Are you actually for real? “

That question is stupid, but not much more so than the rest of your posting.


“Trying to teach me about feminism”

Oh, no, you misunderstand me - I don’t expect anything can teach you - you might as well try and enlighten a tapeworm. You're a lost cause.

No, I just want to expose your hypocrisy to the light. You are an ugly parasite, it’s true, but sometimes that sheer vileness is rather fascinating in it’s own way.

Oooh, so feminists don’t? Oh right - only your strain of feminism is the true Feminism - all the rest are some sort of illusion or something.

Yup. It’s like the way people who opposed Nazism could write about Nazism. Turns out you don’t have to share a movements beliefs to understand it. Gosh.

The dark truth is, one way or another, most of your sisterhood is doing kinky things, sometimes to each other, and there’s fuck all you and your moral police can do about it.

Damn right I’m scared of what Islam has become. The sad thing is, it was actually becoming enlightened until the Islamists took over.

And your mob are encouraging them. Your movement embracing them. You are begging them to rape you. It would be hilarious if it wasn’t laughing at a suicidal insanity.

“While using your own misogynistic blog as source? “

Listen, dolt, I realise reading could be hard for someone like you without assistance from some specially trained baboon to turn the pages and scratch your arse for you, but I don’t use my blog as a reference, and you can suck my hairy balls, because you haven’t once provided any evidence for anything apart from your feelz - whereas my bloody blog has references out the wazoo.

You just can’t be fucked reading them.

Now, don’t you have a hijab to don and some Isis cell to meet up with?

Oh, I have to laugh at this; because she (i presume it was her) deleted the post I was replying to, it caused problems with others who replied to it.

One person, whose identity shall rename nameless, said

"It’s kinda tricky because I really like being dominated and stuff in the bedroom, but as a very vocal feminist and..."

That's the thing - Feminists are human, most humans have some sort of kink, but half of feminism says they should embrace it, and the other half says SHAAAAAAAAAAME!