Why adding replacing English with Newspeak is a bad idea.

"The Principles of Newspeak"

2) asking why we added it to the dictionary pic.twitter.com/wsGZ7Y6XB8
— Merriam-Webster (@MerriamWebster) April 25, 2016 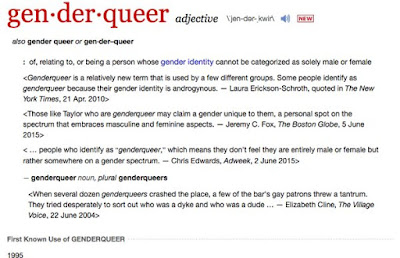 1) saying they don't know what 'genderqueer' means then

2) asking why we added it to the dictionary


What's stopping me from saying I am now Female? SocJus will automatically invalidate the claim because they know i am male. They don't believe in their own words unless they are convenient to believe in - that's the basis of doublethink.


For example, Feminists want all men banned from general public transport, and relocated to inferior versions of it. By their own belief structure, every man could proclaim they are genderqueer and so that rule doesn't apply to them. So how can Feminists maintain the new Apartheid?

Feminists, however, being masters of twisting words and lovers of lies, will always find a way to re-classify males as male without ever acknowledging that that is what they are doing.

Like a Cardassian Court, they have already worked out what the result of the trial is in advance, and it's just a matter of finding a way for the trial to reach that conclusion. They hate men. They claim men do not exist. They will never acknowledge those two statements are contradictory.


The lies comfort them. They'll even let themselves believe in it, briefly, then revel in joy that anyone was gullible enough to swallow them in the first place.
Posted by Brett Caton at 01:02