I've noticed in settlements, especially the busy ones, that the graphics downgrade and become 'blurry'. I have been told that a video card with more VRAM would help?

I wanted to make video clips for youtube that were hopefully of good enough quality to build up a channel following and actually make money (hahaha, yeah, i know, unlikely).

Display Memory: 4038 MB
Dedicated Memory: 1990 MB
Shared Memory: 2048 MB
I have to admit I have trouble figuring out if that means I have around 4 gig VRAM on the card or is it 2 gig, and it's just using the memory of normal RAM as well?

Would this produce higher quality footage? I tried to find an example but YouYube seems to be making things a horrible mess anyway, and i'm working off a backup low res monitor at the moment as the old one blew up - not fun! 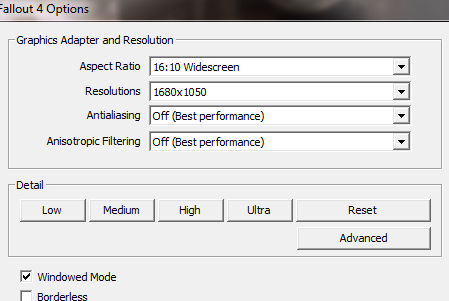 The writing becomes unreadable. Yet the shots below seem fine to my eyes, nice and crisp? Same system was used to produce them and the settlements have lots of different textures. Turned aa etc back on and left system running staring at the replicator: