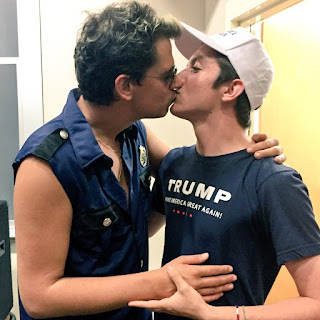 
No, you are outright slandering. There’s a difference.

“ proudly carries Hitler books”... you realise a lot of people have books on Hitler? It’s pretty much compulsory for any student of modern history? Books and movies on Hitler are one of the most popular parts of popular culture?

Your idea that anyone who has a book on Hitler must love Hitler means that you think Winston Churchill was a Nazi - as he owned a copy of Mein Kampf. Oh, lemme guess, you have no idea what that is.

“All was there—the programme of German resurrection, the technique of party propaganda; the plan for combating Marxism; the concept of a National-Socialist State; the rightful position of Germany at the summit ofthe world. Here was the new Koran of faith and war: turgid, verbose, shapeless, but pregnant with its message.” (source)

“Although eugenics flourished in Nazi Germany, the ideal of a blond-haired, blue-eyed master race wasn’t Adolf Hitler’s. It may surprise many to know that, in Mein Kampf, Hitler credited America with helping formulate his ideas on eugenics, and he admitted he’d studied the laws of US states to familiarize himself with selective reproduction and other eugenics issues.” (source)


So if someone like Wagner - they’re a Nazi? Good grief. Nazis also liked paid vacations and nudism. So we now know how to spot a Nazi!


https://en.wikipedia.org/wiki/Iron_Cross The Iron Cross (German: Eisernes Kreuz (help·info), abbreviated EK) was a military decoration in the Kingdom of Prussia, and later in the German Empire (1870–1918) and Nazi Germany (1939–1945).

It was established by King Friedrich Wilhelm III of Prussia and first awarded on 10 March 1813 during the Napoleonic Wars (EK 1813). The recommissioned Iron Cross was also awarded during the Franco-Prussian War (EK 1870), World War I (EK 1914), and World War II (EK 1939, re-introduced with a swastika added in the center).


Does it have a Swastika? No. It is sort of edgy? Yes.

"The Black Cross emblem has become in a number of Anglo-Saxon (British and American) subcultures since the 1960s, in a phenomenon related to the mock-"Germanic" aesthetics also expressed in the use of blackletter or the so-called Metal umlaut.

In the 1960s, American surfers started wearing Iron Cross medals brought home by their fathers as war trophies. Cal Look, Volksrod and other Volkswagen enthusiasts often use the emblem as a symbol that reflects the car's country of origin. Ed Roth created accessories for surfers, hot rodders and bikers derived from German World War II trophies, which included the Surfer's cross and the Stahlhelm (also popular with the VW scene). 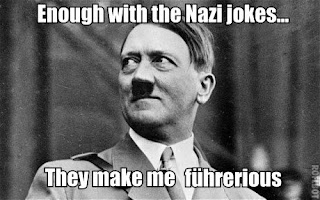 Mortuus, the singer of the Swedish black metal band Marduk, was seen wearing an Iron Cross on a choker chain.[year needed]The Cult incorporated Iron Cross medals and imagery extensively for their Electric (1987) and Sonic Temple (1989) albums. WWE wrestler Triple H (Paul Levesque) has made a variation of the Iron Cross his logo since the early part of the 2000s; the symbol appears six times on his wrestling attire (front and back of trunks, on both elbow pads and on the sides of his boots)”


Goddamn! Look at all those neo-nazis! Maybe it’s that young people just like to stir up shit?

When I was young, we had punks roaming around with all sorts of military symbols, communist symbols and nazi symbols. They didn’t believe in any of it - they did it to push buttons, and it worked.

“ When called on this, he’ll claim to be Jewish. But he’s not. He was raised Catholic. “

You don’t seem to understand what the word “Jewish” means, idiot. According to Rabbinic Judaism, a Jew is anyone who was either born of a Jewish mother or who converted to Judaism in accordance with Jewish Law.

Jesus Christ, this is some lazy-ass bullshit. The Nazis killed lots of people who were Catholic, because Judaism is an ethnicity as well as a religious identity - and Neo-Nazis believe Judaism is a genetic pollution, so it doesn’t matter if you are raised a Catholic or Protestant or Atheist, you are still tainted.


You have presented absolutely no evidence that he is lying about being Jewish. Or that he even said he was, for that matter.

So what other evidence have you presented? A joke about the Holocaust - you know, that event Neo-Nazis say never happened, and even if it did, it wasn’t with Hitler’s knowledge?

You don’t know shit about Neo-Nazis, do you? Couldn’t be fucked checking any of this.


Oh, you mean anti-Feminist? Yes, yes he is. But discriminating on the grounds of sex? You can’t prove that, fucker, you just assert it and your idiotic sheep will bleat “Listen and Believe!” in reply.

Got any evidence of him threatening transexuals?

You don’t suggest people need therapy if you hate them, you treat them with violence. The idea that gender dysphoria is a mental disorder is in fact the consensus. It’s not a fucking lifestyle choice - if you think you are trans, but you don’t have dysphoria, then you are a SocJus wanker desperate for attention - and you aren’t special, except as a waste of everyone’s time.

Let’s look at these other ‘neo-nazis’...


(CNSNews.com) --  Dr. Paul R. McHugh, the former psychiatrist-in-chief for Johns Hopkins Hospital and its current Distinguished Service Professor of Psychiatry, said that transgenderism is a “mental disorder” that merits treatment, that sex change is “biologically impossible,” and that people who promote sexual reassignment surgery are collaborating with and promoting a mental disorder.

“and homophobic (even though he says he’s gay).” He posts images of himself with men doing things straight guys don’t fucking do.

Y’know what? I’m done with this shitpiece. And normally I’d disdain Wikipedia as being strongly corrupted by SocJus - but even they don’t have this shit. Instead, they have a ton of references anyone can check up to see the truth - and to see what fucking awful people are attracted to the Social Justice label.

You know what? It’s Social Justice that are the true Neo-Nazis of our time. They burn books, physically attack people who are simply speaking things they don’t like, and constantly belittle people on the grounds of their race, their sexual orientation and their skin colour.


I don’t see anyone else doing it. No other group that matters is openly racist, sexist and heterophobic. “#KillAllMen” is chanted by them publicly and without any repercussions - no other group could get away with the equivalent without being arrested.