I try not to be surprised by how corrupt Feminists are, but wow, the ones at Facebook really do impress. Just had my account locked, no reason supplied, after arguing with a feminist who claimed that 80% of all men were violent criminals, and was using the situation

- to milk donations from other Feminists because her own brother had committed suicide...

I'd point to an archive of the argument or a screenshot - but since FB locked me out, I can't see exactly where it was. However, here is the comment pasted below.

The take-over of FB by Social Justice has a chilling effect on free speech. A social network which had absolutely no ideology beyond the desire to make profits acquired millions of customers - who know have to check whether anything they say might offend the professionally offended.

In the past, the use of obscenities or repeated abuse or threats would get you banned and that was fair. But see if you can find any of that in my comment.

Note that Facebook has had no problem with me being called a "white cunt" - but locked my account before when i replied with the term "goblin" - which even the complainant said was "cute". 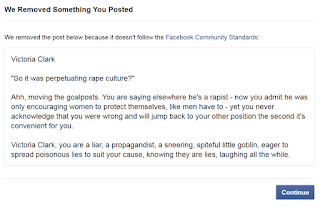 Helen Hicks was the feminist involved in this argument.


"So maybe a tiny group of feminists said that "


I have repeatedly offered evidence that the people saying such things run your movement. Instead of examining that evidence, you advanced a strawman argument, and then sought to emotionally manipulate your audience - donations pls!

"you can't just generalise every woman or feminist for that"


Why the hell are you now attempting to conflate feminists and women? Criticising your bloody ideology is not the same as attacking women except in your delusions.

"I was beaten up by a man on the street after taking out money at a cash point, i could easily blame all men but i didn't"

Also, irrelevant. As I have said before - which you would know if you could bother reading my arguments - dogs have four legs - some dogs have three legs.

Feminists either actively or passively enable the bad behaviour of their representatives. You make excuses constantly.

"I have never said Male Tears"


Yet you stand under the umbrella of those who do, you march with them, and sing their tune. You are responsible for policing your movement - and still you make excuses.

" why are you putting words into my mouth?"


I dunno, could it be that it was in the context of replying to a strawman argument? Is that possible?

"I could say that YOUr [sic] group advocates rape"


You can make any claim you like, sweetums. But there's this little thing we like to call EVIDENCE that you have not any capacity to present.

" (most men commit these crimes" [brings up a long list of crimes such as incest, rape and murder]


And we're done. You - without the slightest bit of evidence - slandered a goodly chunk of humanity, having milked your own brother's death for donations.

Wow. You are a nasty piece of work, aincha?

But here's the thing.

An honest person, who really believed that 80% of the members of another group that surrounded them were dangerous criminals, raping their children and murdering willy-nilly - would either pick up arms and start killing - or flee.

You rest comfortably, safely surrounded by men who protect you, while you spit on them, you blood libel them,

I concede, calling someone a Feminist is very strong language, but I think you can agree it was justified in this circumstance.
Posted by Brett Caton at 21:57