"I think you are beautiful" is now hatecrime, thanks to Feminism

"The force has spent three months training officers and staff on misogyny hate crime, and said it covers ‘incidents against women that are motivated by an attitude of a man towards a woman’."

A hate crime is simply any incident, which may or may not be deemed as a criminal offence, which is perceived by the victim or any other person, as being motivated by prejudice or hatred.


Misogyny hate crime, in addition to the general hate crime definition, may be understood as incidents against women that are motivated by an attitude of a man towards a woman, and includes behaviour targeted towards a woman by men simply because they are a woman.

Examples of this may include unwanted or uninvited sexual advances"


So they have moved the goalposts of misogyny so any incident that any woman dislikes is interpreted as a crime against all women everywhere. Any sexual advance or anything "which is perceived by the victim or any other person", i.e. Feminists, who perceive everything a man does as being motivated by prejudice or hatred.


How do Feminists get away with conflating a sexual advance with a hatecrime?


Repetition! They love the term "cat-calling" because it means anything they want it to - it's never clearly defined. It's about feelings, not facts.

Well, that's hatecrime, you racist, and it means you will be punished.

Say you are a Muslim and you say "I hate homosexuals and atheists, and look forward to implementing Sharia so we can kill them all" - well, that's just diversity and if you object to that, you're sexist!

"Police, who have been working with Nottingham Women’s Centre on the subject, added that the crime includes ‘behaviour targeted towards a woman by men simply because they are a woman’. "

That is now hatecrime.

Telling someone that you find them attractive... is hatecrime.

But only if it's from a man to a woman, of course.

Lesbians, you can do any bloody thing to women and the cops will just look the other way! Go for it! We don't care!

I Was Raped By A Woman At A Party, And No One Did Anything

"There were seven of us at the sleepover. One woman showed particular interest in me, and started asking me questions about my love life. I thought nothing of it -- people are interested in others' relationships all the time, right?

I told her my marriage was on the rocks and I was upset that I hadn't had sex in quite a while. She looked into my eyes and I thought I noticed a hint of longing in her eyes as she said, "But, you're so sexy. You deserve to have sex." "


This means that a straight man trying to hit on women can be technically described as a "hate crime" now pic.twitter.com/MZTEVU1tPk
— Yeyo (@YeyoZa) July 13, 2016


This is some feedback I had on this by a Feminist. 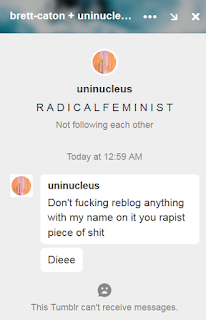 They really are a horrible group of people.