"I’m a feminist who hates men"

- so why do they lie about it?


And why do men fall for those lies?

"I admit it–I’m a feminist who hates men. I feel nothing but revulsion, disgust, and distrust for men. I’m that type of woman everyone makes stereotypical jokes about."

No, luv, we don't make jokes about women being man-haters.

We state that Feminists are man-haters - and when we point out examples, your Sisterhood pretends you are not 'real' Feminists.

We point to organisations like NOW, which have the ear of US Presidents, which help write misandric laws and export feminist dogma world-wide - and the Sisterhood always, always, find an excuse for it.


"I haven’t always hated men. I used to have a high sex drive, and I wanted to get married and have children and a family of my own just like everyone else I knew. In fact, deep down I still wish I could do those things. But I know that just won’t be possible."

Of course it is.

You have confessed your hatred,
and that is the first step to self-awareness.

You need therapy, certainly,
from someone who doesn't hate men - so not a Feminist.

You need to distance yourself, at least for a while, from those who would reinforce your bigotry, and try dealing with the objects of your loathing in a civil manner

- in limited doses, with someone to hold your hand and keep you from becoming violent.

Not easy, I know, but you can manage it.

Try talking to a woman who isn't a Feminist. See if she can help.

Hint: almost everyone isn't a Feminist.

Of course you didn't, because they don't.

Feminists can't name a right men have that women don't.

Instead they whine about men being safe walking around the streets at night - despite the readily available statistics to the contrary.

"  I began hating them because they outright HURT me."

A white boy is hurt by black boys. What should he do? By your wretched reasoning, he should - as you do - hate all back boys. But you take it further. You hate nearly FOUR BILLION PEOPLE because you say two of them did you wrong.

How terrible! What happened when you went to the police with the evidence?

You didn't? Is that because this never happened? Maybe you just drank too much and think you were drugged? Gosh, could you be responsible for your own actions? Heavens to Betsy!


"When his plan failed because he didn’t put enough drugs in my drink to completely knock me unconscious, he suddenly stopped speaking to me."

So... he stopped talking to you?

That's the bit you think is important?

Yeah, I'm gonna call total bullshit on that one. If someone tried to rape me, I AM NOT GOING TO CARE IF THEY DON'T WANT TO TALK TO ME.

I AM GOING TO CARE WHAT THE POLICE HAVE TO SAY WHEN I FILE MY COMPLAINT.

FFS! Seriously, Feminists are a pack of whining cunts!

So his evil plan was... he told you how he felt. He expressed his feelings. He was honest. He did what feminists keep telling men to do.

That was how he hurt you.

By not being a fucking robot.
Fuuuuuuuck I don't hate women but by all the gods, I fuckin' hate you. Ahhh, slut-shaming! Oh, right, it's fine if you do it - it's bad if a man does it. He wasn't in  relationship with you. He can fuck anyone he wants.

" some of them other men’s wives & girlfriends"

And yet you don't seem to hold them responsible for their actions.

Because women can do no wrong, in the eyes of Feminism.

"At that point, I was no longer a person or even a human being anymore; I was just an object."

No, you were an agent, responsible for your own bad choices. You just want to push all responsibility onto men.

You have chosen to be a victim, because it is easier than facing the hard choices life is offering you.


"I was no  better than all the hundreds of other unsuspecting women he had slept with. "


If hundreds of 'unsuspecting' women are sleeping with him - no, that's fucking bullshit, their panties aren't slipping off by accident, they aren't slipping on a banana skin and falling onto his cock...

"I was just a dumb fool who got used and tossed aside: a joke. "

Fuck. Ok, that's enough. The pity party is over. What shits me about how Feminists is not how many of them seem to be emotionally retarded, but that they can actually suck other people into their narcissistic self-absorbtion.

If this was a male, we should say MAN THE FUCK UP. You had some bad experiences? You aren't good at finding the right partners? Get over it. Get better at it. Don't you DARE blame all women for the failings of your relationships.

So why do we treat women as if they were weaker than men?

Why is that inequality APPLAUDED by Feminism? And it is applauded - this person was put up on this platform by feminists and is cheered on in the comments. Can you imagine that happening on some MRA site? You think we have time for that bullshit?

We are dealing with men who are suicidal because their exes have denied them visitation rights to their children, who have made false accusations of domestic violence which means they face prison, we deal with men who have been raped but who cannot get justice because feminists changed the law to mean the only people who can legally rape are those with a penis.

And what do Feminists deal with? 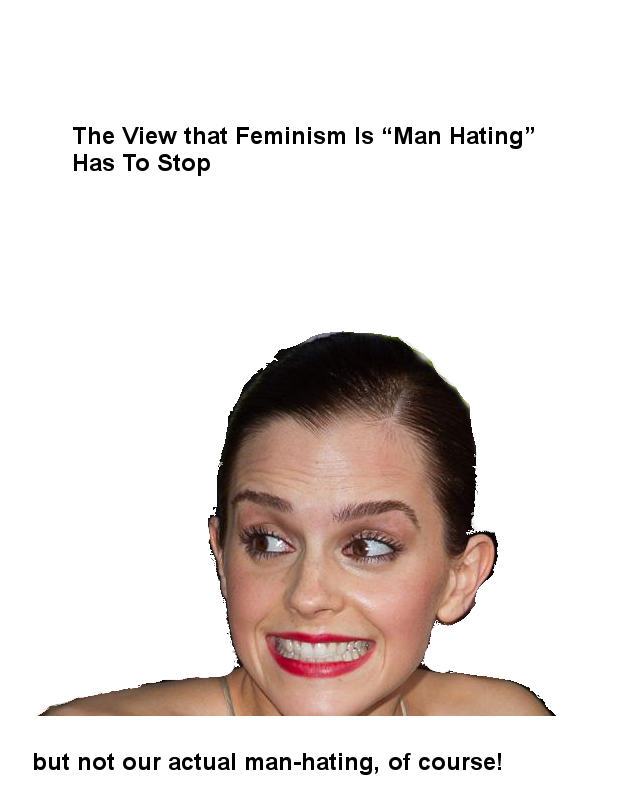 And the core texts highlight violence against women only, despite decades of research showing that women are more likely to initiate domestic violence."


From You can't deny it. Gender studies is full of male-blaming bias
Posted by Brett Caton at 15:48