Yes, that was a joke. She really did have him destroyed, however.

"Zane Alchin, 25, from Caringbah, was sentenced ... for using a carriage service to menace" 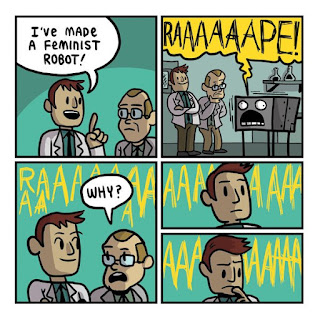 So what did he say that was so terrible?

"feminists don’t get any action, so when you rape them it feels 100 times tighter”


This is obviously a joke, as even rapists don't want to stick their dicks in... her... (*shudder*)

How was he menacing anyone?

He might have been annoying, true, but he made no credible threats. Heck, I remember hearing jokes about tossing babies into blenders. Don't recall anyone being arrested for hatecrime back then.

Perhaps it was because we understood that making a joke is nothing like actually doing something?

This man didn't threaten anyone, all he did was make a few crude jokes. Now, I agree they are in bad taste - but if you don't want to read his stuff, it's trivial to block someone on facebook.


What feminists have decided is not only that they don't want to hear jokes directed at them, but you aren't allowed to make them in the first place. And they are the ones running the country.

Feminists constantly make the claim that they are an oppressed class, savaged by evil man-beasts as a part of the global conspiracy by all men against all women.

Who is really in power here?

Who is it who gets to ruin someone's life over a joke?


Apparently I wasn't sufficiently clear when i said I was joking about Paloma imprisoning a man. He is currently at large, albeit with severe restrictions on his freedom, and - potentially -  will remain so.

The planet he was living on, however, was not so lucky.

Feminists do not forgive, and they do not forget. Consider yourself warned.