Feminism is here to shame all those damned sluts! 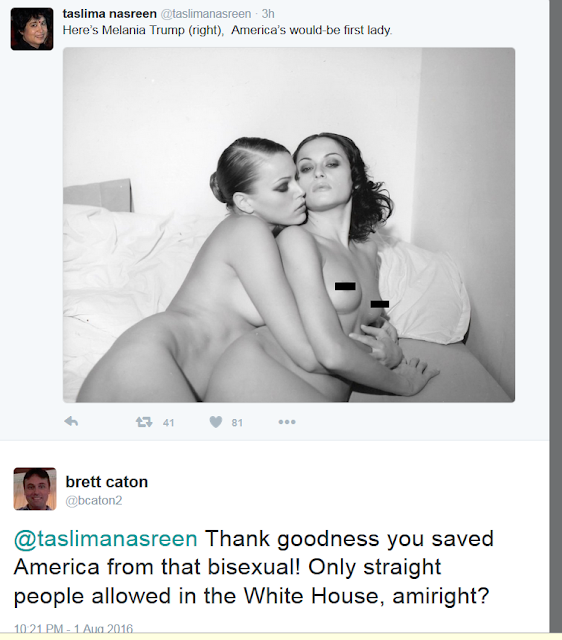 
She was very excited by a chance to humiliate the slut who made her feel so ugly... I mean, who was terribly exploited by the Patriarchy and who needed saving from herself!

I mean, I would have thought she'd be pleased to see women lying with other women, rather than being a horrible penis-loving gender traitor!


If they are misogynistic, they hate women. It seems a bit strange that they'd be applauding this woman if they hated all women. This is a typical feminist tactic - when men say anything you don't like, just hit them with the slur that they hate all women.

It's a terrible thing to say, because if there's one weakness men have is that most of them would give their lives for the women they love. But because the slur is impossible to disprove, feminists sling it about with malicious glee. They really are an appalling bunch!

But this is the strawman she's built here. Everyone mocking her hypocrisy in slutshaming Melania is being painted as conservative (which to Feminists automatically is heavily loaded with preconceptions - and is farcically untrue, many antifeminists are classically liberal).

As for painting us as narrow-minded? Sweety, you're the one getting her knickers in a twist at the thought a woman might like to do things that make men's naughty bits stand up!


"Pornography/prostitution has nothing to do with women's emancipation"


Bullshit. Making money gives you power. Which is why people do it. You go down a coal mine or up a power line because it pays the bills, even when it means risking your life. Modelling or sex work is no different. Some people might enjoy their jobs, but almost all workers are doing it because they have to.

That's how reality works. You don't get free stuff because you deserve it. You have to earn the stuff you want.

Feminists are naive communists. They think they can overthrow capitalism and have it that women just get free stuff because vagina.

THE WORLD DOES NOT WORK THAT WAY.

Outside of fantasy, food does not rain down from the sky. Houses do not build themselves. We earn our bread with the sweat from our brows and the blood from our blistered hands.

Good morning from RIO with my girl @NMoralesNBC. @SavannahGuthrie we got you a little something.... pic.twitter.com/mT5Btq8pBu
— Jenna Bush Hager (@JennaBushHager) 8 August 2016

It's totally ok for female reporters to leer at and fondle a male athlete - but if this was gender reversed? Rape culture! Misogyny! Hatecrime!


"...something to do with sexual objectification"... something which has never been proven to exist, and is simply asserted time and again, a matter of faith.

A man gazes with lust at a woman. The lust transforms her from a person into an object.

Only if it's a man, mind you. Feminists believe that female lust is pure. If women do to men what men do to women - it's totally ok, because... vagina!

Why the hell would men allow them to be CEOS, Queens, even the leaders of Empires? Why would men commit suicide when their wives died, but not when their cars died? Why would a crime against a woman be treated so much more seriously than against a man?

And why would we punish women with jail sentences if we men thought of them as objects? Wouldn't we just destroy defective units?

Why the fuck would men give objects the vote? Give them guns and bombs and tanks? Give them the power to take life at a whim?