Showrunners call rape-for-shock-value a “plague on the industry”


Do they? Because it's been there since the first works of fiction were created. Along with incest, murder and insanity. So - are they to be eradicated as well? Will perfectly inoffensive fiction be created by a committee of the politically correct? 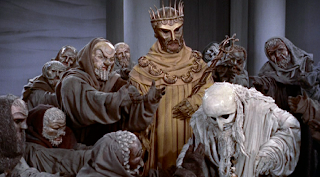 - which was manufactured for shock value, ironically enough. The truth of that situation was considered far too dull.


"I would say out of those 200 scripts, there were probably 30 or 40 of them that opened with a rape or had a pretty savage rape at some point"


Yes. It pushes emotional buttons. You can have a billion dead male bodies and people will yawn. One female rape, an the pulses are racing! One male rape? Oh, that's called a comedy.

Or Amy Schumer having a night out.

Ahh, so you are not going to motivate your audiences to care about the situation. An interesting tactic! So Luke Skywalker's adopted parents, in the revised Star Wars, will not be shot and burnt, well - not sure of they were shot, but it's kinder to think that they were. Instead, they shall all sit together braiding each other's hair.

It would certainly make for a shorter story. Save a lot on production costs. And on hiring cinemas, because who the hell would pay money to see that?

People want horrors. They want pain. To purge themselves. This has been known since the time of the Greek civilisation - yet somehow it's news to these guys.

"Most notably, Variety cited HBO’s blockbuster Game Of Thrones—long criticized for its willingness to deploy rape as a method of shock"


criticised by feminists, not people who actually create stuff, yes. I noticed the readers of that book series were perfectly happy to make it into a mega-best-seller despite the fact that a few ideologues shrieked UNACCEPTABLE every time a fictional woman suffered.


They half did that and you guys freaked. You really need to get your story straight, if only for an afternoon.

"don’t use it as a way to motivate a male character.”


Fine. Men are raped in prison all the time. Tell me about all the feminist stories where the woman who loves a male rape victim does something to avenge his pain.

I mean, there must be hundreds... dozens... one? Is there even one? Is there any single fiction a feminist has written where the value of a man's pain is enough for a woman to lift a finger?

Of course not, silly! Feminism is for everybody! Just not MEN.