Read this, and think about the effect antifa had by smashing a peaceful, law-abiding member of a right-wing organisation. I doubt the results will be what they expected!

From State of Deception: The Power of Nazi Propaganda, by Steven Luckert and Susan Bachrach, pp. 48-50:

In the final years of the Weimar Republic, Germany was mired in a grave political and economic crisis that left the society verging on civil war. Street violence by paramilitary organizations on the Left and the Right increased sharply.

In the Nazi campaigns, propaganda and terror were closely linked. In Berlin, Nazi Party leader Joseph Goebbels intentionally provoked Communist and Social Democratic actions by marching SA [Brownshirt] storm troopers into working-class neighborhoods where those parties had strongholds. Then he invoked the heroism of the Nazi "martyrs" who were injured or killed in these battles to garner greater public attention. 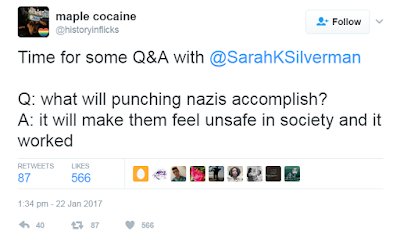 
Nazi newspapers, photographs, films, and later paintings dramatized the exploits of these fighters. The "Horst Wessel Song," bearing the name of the twenty-three-year-old storm trooper and protege of Goebbels who was killed in 1930, became the Nazi hymn.

The well-publicized image of the SA-man with a bandaged head, a stirring reminder of his combat against the "Marxists" (along with other portrayals of muscular, oversized storm troopers), became standard in party propaganda.

In the first eight months of 1932, the Nazis claimed that seventy "martyrs" had fallen in battle against the enemy.

Such heroic depictions -- set against the grim realities of chronic unemployment and underemployment for young people during the Weimar period -- no doubt helped increase membership in the SA units, which expanded in Berlin from 450 men in 1926 to some 32,000 by January 1933 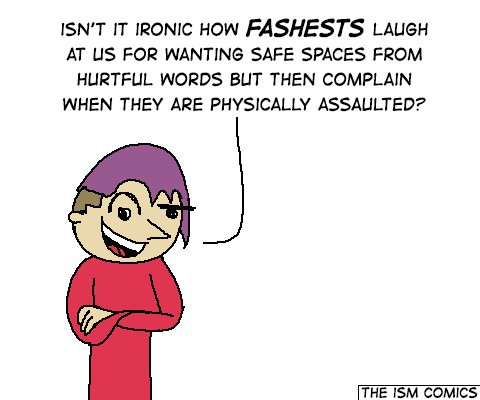 If you justify physical violence to silence someone for their opinion, you're giving others carte blanche to use it against you.
— Ian Miles Cheong (@stillgray) January 21, 2017 Today my twitter stream exploded. Madonna talked about blowing up the White House - to the applause of her Feminist audience. Antifa, masked and rioting, bashed and burned and looted. And a nationalist, known only for mean words, was assaulted in such a way that he could well have died, on the grounds that his words made him fair game, that he must be a fascist.

I have to wonder if these people have any idea what that word means? I think they just think it's a noise that you make when you see someone you don't like? Love Trumps Hate, so they chant, as they loot, and they burn, and they bash. War is peace. Ignorance is Strength. Violence is Love.


And they justify assault with claims they are merely stopping a genocidal maniac before he could do anything - without even checking if he has even talked about genocide.


Hey @KeeganNYC, Richard Spencer never even said this. If you're going to criticise him, might be worth checking you have your facts right. pic.twitter.com/lbgoQZ2eAU
— DatNoFact (@datnofact) January 21, 2017 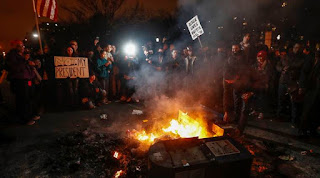 Left wing celebrities came out to applaud the bloodshed. Madonna later said that she'd "thought an awful lot about blowing up the White House." They see it as justified, because their enemies are "Nazis".


I've been called a Nazi. I've had a newspaper refer to me as a fascist.
It could just as easily be me getting hit because "reasons".
— Blaire White 💋 (@MsBlaireWhite) January 21, 2017 @Cernovich Just got back from Milo. Had my phone smashed, was maced & was nearly punched in the face by a masked man. Yes, seriously!
— Blonde (@LibtardAmerica) January 21, 2017


I got called a Nazi again. For NOTHING. For asking a QUESTION They see it as justified, because they believe Martin Luther King would have seen it that way.

Anti-Trump protesters can be seen smashing windows in Washington on the day of his inauguration https://t.co/Yq5d4v3D8A
— Sky News (@SkyNews) January 20, 2017 KING (interview): I will never change in my basic idea that non-violence is the most potent weapon available to the Negro in his struggle for freedom and justice. I think for the Negro to turn to violence would be both impractical and immoral. I would hope that we can avoid riots because riots are self-defeating and socially destructive. http://www.cbsnews.com/news/mlk-a-riot-is-the-language-of-the-unheard/


Me: "violence isn't the answer"

*Sees Richard Spencer get punched in the face* And people called them out on their bullshit.


"My behavior is excusable because the people I'm violently stomping out are objectively evil." 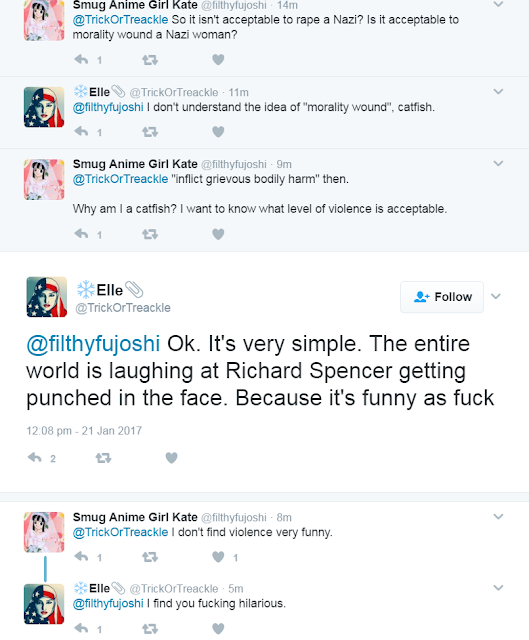 SocJus loves to play games; they are usually dishonest. They know damned well the autocorrect changed "mortally wound" to "morality wound". They don't care. Behaving decently is not what Social Justice types do. The ends justify the means, always.

And that means lying.

And that means violent attacks.

Note: they blocked me, and presumably the Kate person, right afterwards, so i don't know if they deleted this. However, here is the archive. I can’t get over how many left wing people are advocating the assault or even murder of anyone who disagrees with them. I remember when it was the left who were advocating for peace, who were handing out flowers and offering hugs. Now, they are wearing balaclavas and bashing people’s skulls in.

They demand the silencing of all who dissent. In the name of Martin Luther King, a man who never did such an act. They have rewritten history in their minds, to make themselves righteous.

Here's what he really said.

The ultimate weakness of violence is that it is a descending spiral,
begetting the very thing it seeks to destroy.
Instead of diminishing evil, it multiplies it.
Through violence you may murder the liar,
but you cannot murder the lie, nor establish the truth.
Through violence you may murder the hater,
but you do not murder hate.
In fact, violence merely increases hate.
So it goes.
Returning violence for violence multiplies violence,
adding deeper darkness to a night already devoid of stars.
Darkness cannot drive out darkness:
only light can do that.
Hate cannot drive out hate: only love can do that.

The self-righteous feel free to be violent. We’ve seen this all before. So many times.

The absolute belief that you are right, and anyone who disagrees with you is a monster, can only lead to one outcome.

This is what the left has turned into. This is what has become of the legacy of flower power and love.

He that would make his own liberty secure, must guard even his enemy from oppression; for if he violates this duty, he establishes a precedent that will reach to himself.

That feeling of self-righteousness is what every fascist feels.


Man who shot person at protest of Milo at UW says he shot a Nazi. Turns out it was an antifa with a swastika tattoo. https://t.co/7eiATGg4vl
— Ian Miles Cheong (@stillgray) January 22, 2017

How the king hit can maim or kill 
I see a lot of people arguing that it's good and right to hit Nazis. After all, we fought a war with Nazis. And Japanese. So it's good to hit Japanese, amiright? 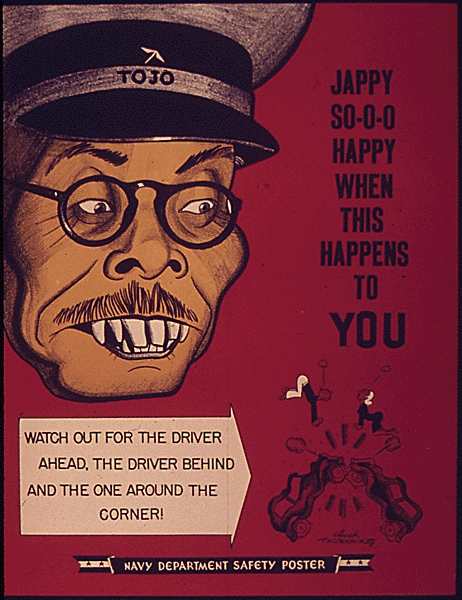 If someone is obeying the law, they deserve the protection of the law. There's no wartime situation to justify violence.


Besides, do we really want to establish the principle that it's ok to his Nazis - when anyone can define US as Nazis on a whim?

A feminist assaults a woman. Hundreds of other feminists witness it, laughing or indifferent.

Feminists claim to fight for women, but the truth is they fight for Feminism, and will hurt or kill women who get in their way.

An interesting article on Tumblr regarding hate/free speech.

SocJus to set 'Nazis' on fire?

Liberal tries to set a President Trump supporter on fire at the #WomensMarch If you can identify this person, let us know. pic.twitter.com/MpiqGhh6rn
— Truth Bombers (@Truth_Bombers) January 23, 2017


@Breaking911 Thanks for getting this out there.


Considering that you mistook the Red Baron for a nazi, I sure hope they don't put you in charge of sorting the nazis from the not-nazis. pic.twitter.com/RKWtXyG2Il
— Best Mom Eva (@mombot) January 26, 2017

Email ThisBlogThis!Share to TwitterShare to FacebookShare to Pinterest
Labels: antifa, one punch can kill, punch a nazi, trump