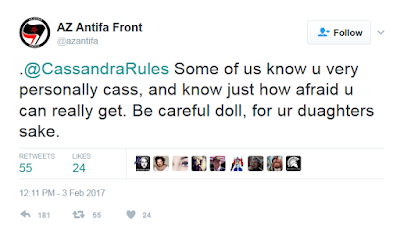 It's fascination how strong the link between the two has become, with prominent feminists coming out in support of the assaults, the fires and the silencing of dissent.

Can you imagine this woman as a counselor or a teacher? Someone whose proud boast is that she blocks trolls? Yet has nothing to offer beyond that herself - her only means of argument, abuse and threats?

"Progressive"? Someone who applauds the violent assault of people simply because they don't agree with you?

Literally beating people in the streets with bats. The University, town, and police force allowed this to happen. pic.twitter.com/E62GW0EsPu
— Just Call Me Mister (@MisterMetokur) February 2, 2017

Guy lifeless on the pavement after being attacked by a group of antifa-thugs.

We won this night. We will control the streets. We will liberate the land. We will fight fascists. We will dismantle the state. This is war. And the response of the ABC Australia news is...


A martyr (Greek: μάρτυς, mártys, "witness"; stem μάρτυρ-, mártyr-) is somebody who suffers persecution and death for advocating, renouncing, refusing to renounce, or refusing to advocate a belief or cause as demanded by an external party.

So they are calling on someone to murder Milo Yiannopoulos and Richard Spencer.

This is a Progressive Mayor who supports silencing speech with actual violence. He's proud. America should be embarrassed. https://t.co/DVkT5ncwOA
— (((Jason Rantz))) (@jasonrantz) February 2, 2017


2017: the historic year in which the term "Nazi" was reappropriated for a gay Jew that prefers going by the moniker "dangerous faggot." 😂😂😂 pic.twitter.com/UrGA9KdXU2
— Degeneracy Kills (@DegeneracyKills) February 2, 2017

This isn't a protest. It isn't a riot. It's anarchy by the left and it should be dealt with accordingly. #MiloRiots #MiloAtCal #BerkelyRiots pic.twitter.com/unYSuJobGv
— John Dee (@BrokenCountry1) February 2, 2017


@MisterMetokur
I'm the dude who got assaulted by the communist cowards
Nothing but yellow cowards.
10 sucker punches, not one KO
Pathetic pic.twitter.com/ebpy1RcQKV
— Eddy Brock (@EddyBrock_YT) February 2, 2017

Indie game developer Jonathan Blow (Braid, The Witness) is speaking out against the violence in Berkeley. He's being skewered alive for it. pic.twitter.com/HpTncKkkd0