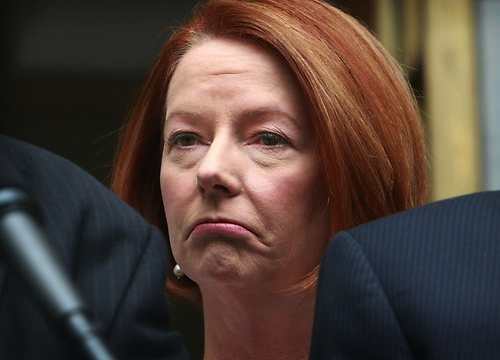 
"The first woman to occupy the post of Australian prime minister says she remains hopeful that the "next few years" will see a "great feminist wave of change", despite the fear, anxiety and nostalgia that have driven the rise of figures like Donald Trump."

Note that it's unclear whose opinion it is that "fear, anxiety and nostalgia that have driven the rise of figures like Donald Trump".

Is it Gillard's? The author's? Who knows? It is simply presented as fact, and never challenged.

Maybe... just maybe... Trump was elected because the alternatives were worse? I can't count how many people said "I would have voted for Bernie but he folded when BLM bullied him - he was too weak to be leader".

And Clinton? "The future is female" is a reference to a call to genocide me. She championed it. Feminists had no problem with that, they applauded when she said it. What do you think that makes men think when they hear her say that? That their sons will have no place in the Feminist Future?

Maybe some people love their sons? Just a thought.

"Speaking at a Labor fundraiser in Sydney, Julia Gillard said that "yes, there is Trump" but there was also "the women's marches, #MeToo and more women running for the US Congress than ever"."

The women's marches, with Linda Sarsour as their leader, calling for an end to Jews and the imposition of Sharia Law? Oh yes, very progressive!

#MeToo, calling for an end to Due Process and the Presumption of Innocence, calling for an automatic guilty verdict for any man accused by any woman? Gosh. I wonder why men wouldn't want to commit suicide by supporting that!

More women running? Citation needed! What I have seen is Feminists demanding - and winning! automatic victory for any woman who wants a seat at the head of the table.

Feminists hate merit. They dream of a segregated world, with two legal systems, dependent on the sex you are born with. Born Female? That's the correct sex! Automatic jobs for you, but only the best jobs, of course. Men still have to do all the dying so you can be safe.

No wonder even little boys are having sex-change hormones. The Future is Female. Being Male is Toxic. Who would want to be male in a Feminist Tomorrow?

" And I genuinely believe that when the history books are written about this period, it will be identified as another of the great feminist waves of change"."

Just like the 1930s were a period of fascist change. The thing about progressives is they follow the Marxist idea that history has a time table, and that everything is marching to Utopia - and if you stand in the way of Utopia, if you are a counter-revolutionary, it's off to the re-education camps for you!

It's not lazy, it sells. That is called Capitalism. There is a demand amongst female readers to read stuff about clothes. Men do not care about the brand name of some chick's outfit. They care about boobs and butts. Clothing is the last thing on their minds.

" men were shielded from this by virtue of adopting effectively "uniforms"."

Gosh, if only Feminists could use things called "arms" to put on those outfits too. If only. Maybe they need men to dress them, because it is just too hard?

Trump's appearance is a constant feature of Progressive reporting. I don't think I have seen an article where they don't moan about the colour of skin, his hair, his hands or even his penis.

But I forgot the Feminist Mantra - "It's okay when we do it!"