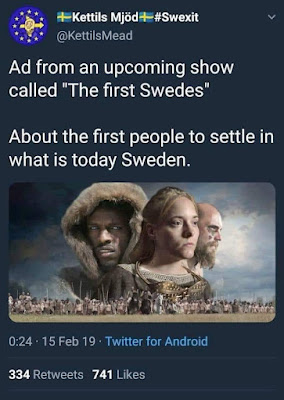 Well,now it appears that the 'muh scientists ' were bullshitting,since they actually had to contend with people who know what they're talking about,who saw through the propaganda.I've now read countless in depth studies which called this as propaganda,and the scientists have to admit it too. New Scientist,only one week after publishing the 'Cheddar Man was black to dark skinned 'story NOW state that the DNA interpretations are not rooted in fact,but are speculation.


https://www.newscientist.com/article/2161867-ancient-dark-skinned-briton-cheddar-man-find-may-not-be-true/ For those who don't have a subscription,here's the text- "A Briton who lived 10,000 years ago had dark brown skin and blue eyes. At least, that’s what dozens of news stories published this month – including our own – stated as fact. But one of the geneticists who performed the research says the conclusion is less certain, and according to others we are not even close to knowing the skin colour of any ancient human. The skeleton of Cheddar Man was discovered in 1903 in a cave in south-east England where it had lain for 10,000 years. Until a few weeks ago, he had always been depicted with pale skin. This makes some sense, given that people living at northern latitudes often have paler skins. The explanation may be that it allows more of the weak northerly sunlight into their skin, so they can make enough vitamin D. And it seems our species reached Europe 30,000 years before Cheddar Man lived, so his ancestors would have had plenty of time to evolve paler skins. But the new DNA analysis suggests that Cheddar Man may have had dark skin. Most news stories said his skin was “dark to black”. Giveaway genes To show this, researchers including Susan Walsh at Indiana University–Purdue University Indianapolis read Cheddar Man’s DNA. Walsh had helped develop a model that attempts to predict someone’s eye, hair and skin pigmentation solely from their DNA, and the team applied this model to Cheddar Man. The most recent version of the model was published in May 2017. It focuses on 36 spots in 16 genes, all linked to skin colour. To test it, Walsh and her colleagues took genetic data from over 1400 people, mainly from Europe and the US but also some from Africa and Papua New Guinea. The team used part of the data to “train” their model on how skin colour and the 36 DNA markers are linked. They then used the rest of the data to test how well the model could predict skin colour from DNA alone. The model correctly identified who had “light” skin or “dark-black” skin, with a small margin of error. When Walsh and her colleagues applied the model to Cheddar Man, they concluded his skin colour fell between “dark” and “dark to black”. Not so sure The research was first announced by press release, to coincide with the release of a TV documentary. It has now been posted to a preprint server. Walsh stresses that the study doesn’t conclusively demonstrate Cheddar Man had dark to black skin. We cannot place such confidence in the DNA analysis, she says. For one thing, Cheddar Man’s DNA has degraded over the last 10,000 years. “It’s not a simple statement of ‘this person was dark-skinned’,” says Walsh. “It is his most probable profile, based on current research.” In fact, we are not ready to predict the skin colour of prehistoric people just from their genes, says Brenna Henn at Stony Brook University, New York. That’s because the genetics of skin pigmentation turn out to be more complex than thought. Too many genes In November 2017, Henn and her colleagues published a paper exploring the genetics of skin pigmentation in populations indigenous to southern Africa – where skin colour varies more than many people appreciate. Just weeks before, a group led by Sarah Tishkoff at the University of Pennsylvania in Philadelphia had published a paper on the genetics of skin pigmentation in people from eastern and southern Africa. “The conclusions were really the same,” says Henn. “Known skin pigmentation genes, discovered primarily in East Asian and European populations, don’t explain the variation in skin pigmentation in African populations. The idea that there are really only about 15 genes underlying skin pigmentation isn’t correct.” It now seems likely that many other genes affect skin colour. We don’t know how. If we are still learning about the link between genes and skin pigmentation in living populations, we can’t yet predict the skin colour of prehistoric people, says Henn. This debate may seem of little practical importance – although the idea that Cheddar Man was dark-skinned generated enormous public interest. However, we need to know the limitations of this sort of genetic technology. Police could one day plug DNA from a crime scene into one of these models to determine what a suspect looks like. Walsh’s model might succeed at this in the US, says Henn, because it was trained on DNA from people with similar ancestry to North Americans. But it may well fail elsewhere. Henn’s team has tested an older model that aimed to predict skin colour from DNA. When they put it to work among southern African populations, “it literally predicted that people with the darkest skins would have the lightest skin” Would the BBC now like to shout THIS from the rooftops??﻿
Posted by Brett Caton at 22:42