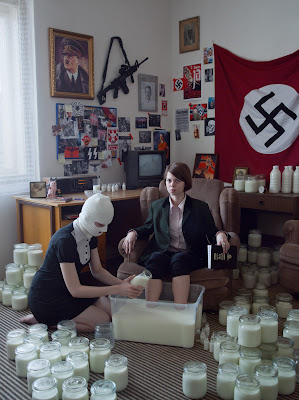 For one thing, "far right" needs some definition, because what it used to mean was people who were either Nazis or neo-nazis - and very very few people are. It's now been stretched to cover anyone who votes Republican.

For another - if the far right drinks milk, IT DOES NOT MAKE DRINKING MILK ANTISEMITIC.

That is not how logic works. You cannot discredit an argument by association.

The trouble with the use of "conspiracy theory" is that it is loaded language. Here is a conspiracy theory - marxists plotted to install communism globally. It is a theory that marxists worked together. It's also trivial to check that it is true, and they are quite open about it.

Saying something is a conspiracy theory is an underhanded way of saying it is false without requiring proof.

"Many of the academics of the critical theory movement were Jewish"

Nazis were German and white. Nazism was bad. Opposing Nazism didn't make you anti-German or anti-white!

Here is the definition the majority of people use when they mention "cultural marxism":

A social and political movement that promotes unreason and irrationality through the guise of various 'causes', often promoted by so-called 'social justice warriors'.

These causes and their proponents are often contradictory and are almost never rooted in fact.

Indeed, true argument or discussion with proponents of these causes is almost impossible, as most attempts at discourse descend quickly into shouting, name-calling and chanting of slogans.

Otherwise known as the 'regressive Left' - a play on their contradictory nature, specifically on how SJWs describe themselves as 'progressive' yet display strong authoritarian, 'regressive' tendencies.

This term is even often used by members of the true Left who take reasonable stances based on logic and evidence, and are eager to distance themselves from the fanatics who have effectively hijacked their side of the political spectrum.

NOTE: Naturally, Cultural Marxism itself is described by SJWs as a 'conspiracy theory', in an attempt to delegitimise their critics.

Some examples of Cultural Marxism include:

- Anything that involves perpetual anger and outrage, denies personal responsibility, demands the surrender of personal liberties as a form of appeasement, or legitimises what would normally be considered madness.

Or a combination of all of these characteristics.