'Researchers' demand sexbots that will say no to men 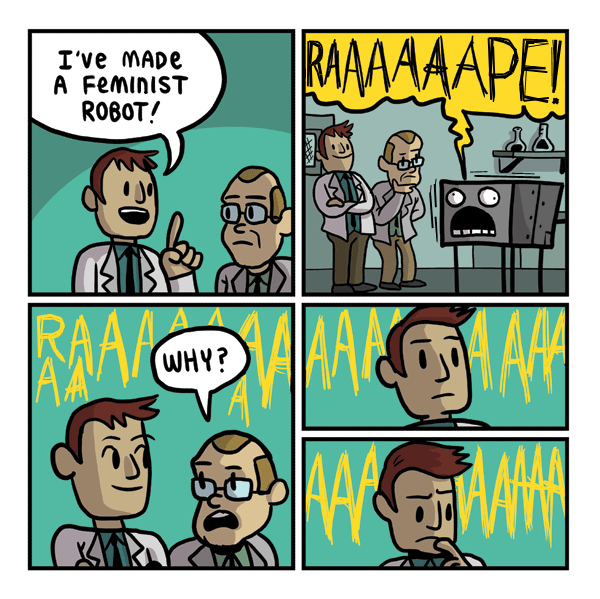 Are “virtuous sex robots” the way of the future?

No, because you need sapience to have any hope of virtue.

Something that is mindless and insensate needs no consent, we do not beg lettuce permission before we consume it.

No, this is anti-male propaganda. I do not need to be lectured at by the self-righteous ideologues of the Far Left, any more than I need my toothpaste to tell me to embrace the teachings of der Führer .

"Anco Peeters, a doctoral student at Australia’s University of Wollongong"

Universities shouldn't be tax-payer funded when they teach this level of idiocy. There's nothing here but an defecation given a dusting of paint for respectability.

This is impossible even for humans - we simply have no common definition of virtue. Or should we indoctrinate girls into Sharia? Would robots teaching boys to strap bombs to their bodies be acceptable? Because that is seen as virtuous by millions, perhaps billions, of people.

"Sex robots should have a consent module"

Fantastic. As soon as he has created true consciousness in a machine, we can talk about consent. Of course, we would then chat with the machine, not the so-called 'expert'.

" even “active consent” has its problems since “verbal consent does not necessarily mean that a partner is freely engaging in sex.”"

Yes, it is a ludicrous concept that only exists to let feminists retroactively deny consent. Even if a man gets witness statements, a Feminist can turn around and claim her yes meant nothing - and the law will back her up.

Every Feminist is a false rape accusation waiting to happen. The irony is they keep threatening to stop having sex with men. When? When will they do that? Now would be good?

Now? What about now, then?

And they love to lie about rape, because even if a man can defend himself against twenty false allegations, there will always be one that gets through.

"The authors argue that robots can help “nudge users towards virtuous (or vicious) behaviour,” such as congratulating a human for exercising"

Big Brother called it "physical jerks" in 1984. Otherwise it was identical.

How about we don't have The State telling us what is good for us?

Ok. Killing people is perfectly ethical? Because I observe that happening, so if i mimic it without awareness, it should be fine?

"What could be wrong about acting out a rape fantasy"

Nothing, because fantasy is not reality, and sane people consistently can tell the difference. Otherwise, every woman who says "Daddy" to her lover would be having it off with her father.

Feminists don't think anything through, and cannot think skeptically. How the hell do these morons pass exams? Are the lecturers passed out in a corner, the odour of excretions all around, discarded heroin needles in a huge pile? What are they doing, to discard all the teachings of thousands of years on how to think?

Yep, humans can form relationships with objects. The objects cannot reciprocate and remain objects. All the wishful thinking is not changing that. If you want humans to love other humans, maybe work on that instead of trying to make objects act like feminists?

"Peeters and Haselager say “active consent” has been a helpful way at college campuses to fight sexual assault and rape."

You might as well claim the same about prayer, there is precisely as much evidence it has averted earthquakes.

Again, these people do not understand skeptical thinking. It never occurs to them that their beliefs are not facts.

" “the misuse of sex robots could have a lasting impression on an adolescent learning about intimate relationships,” "

We heard all of this before from The Right. It was debunked as psuedoscience over and over. Remember when The Left was the one who believed in the scientific method? Ahhhh, the good old days....