All women are Lesbians? 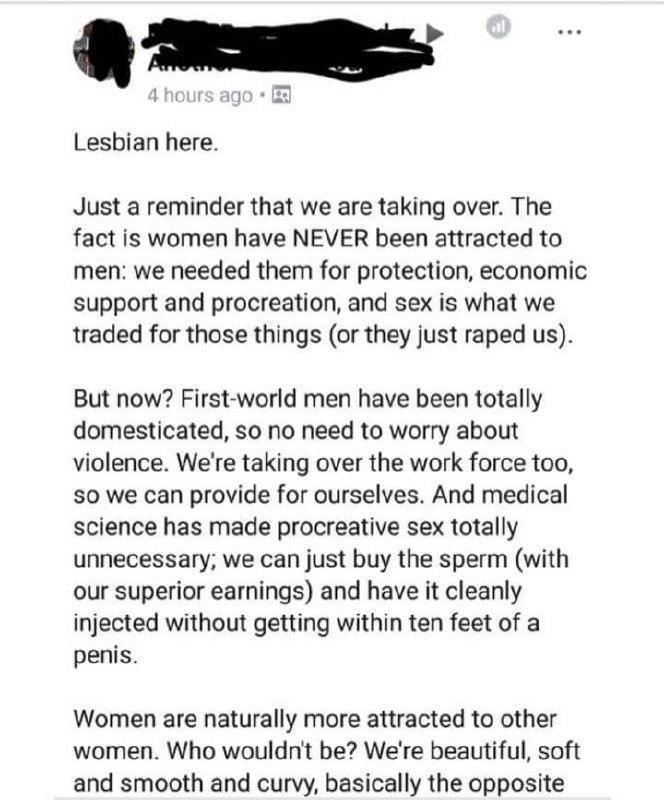 Feminists claim all women are naturally lesbian - and this is nothing new, it’s part of the core dogmas since the 1960s.

I remember at Sydney Uni the very moment I became a true antifeminist. I’d considered doing some units in Women’s Studies. I’d been brought up as a Feminist and - although my faith was shaken - I still had some attraction to what I thought of as their ideas.

But then I looked at the books on the reading list. Skimmed through one. Found a passage advocating mothers ‘innoculate’ their daughters against heterosexuality when they were small children, via lesbian incest.

Read the next book.

I left the movement forever.

I ask you this:


If the Future is Female, and Feminists need no males, then why haven’t they left our society? Why are there no Feminists demonstrating independence, anywhere on the globe?

Every Feminist on Earth is attached to men like a tapeworm.

They are completely dependent on us for survival, but by their nature, they kill their hosts and have to move on. They murder through false accusations, #MeToo; through the divorce courts and domestic violence lines, through forcing their little boys to despise their own masculinity and to become chemically castrated.

Feminists hate us with a loathing that would put a Dalek to shame. Yet not one Feminist will log off from Tumblr, and go and build a society without men.


So I ask men this: do we need Feminists?

If not; why should we endure the company of people who hate us, who demand our labours and give nothing in return, who set themselves up as our Lords and Masters whilst spitting on the idea of democracy, who take every opportunity to harm and even murder their fathers, their brothers, their husbands and sons, and we just bow and scrape for fear of their false accusation:

“If you don’t love Feminism - YOU HATE WOMEN!”


If every Feminist choked to death on their own bile, men would love women just as much. Our love is not dependent on their false gods.
We men love women who are capable of sharing love, of caring for us, and our sons, and our brothers. Feminists just can’t feel that.

Yet all of them would die if men said one word, just one word, to their demands.