If BLM catches you alone ... 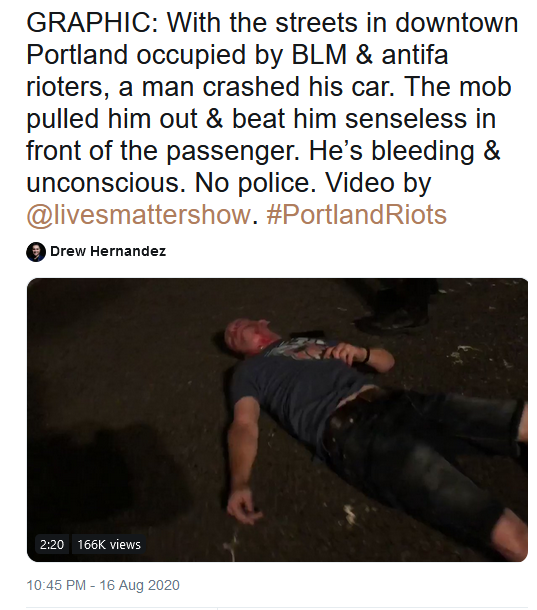 With the streets in downtown Portland occupied by BLM & antifa rioters, a man crashed his car.

The mob pulled him out & beat him senseless in front of the passenger. He’s bleeding & unconscious. No police.

If BLM catches you alone, they may bash or even murder you. Do not act alone.

If you are in a Democrat controlled area, and cannot leave, try to work with others for mutual self-defense, and move OUT as soon as you can.

The police under the Democrats may do nothing about BLM, but they WILL target you if you defend yourself. If you are in a free area, train with others. BLM will move out from Democrat strongholds as soon as possible. They cannot defeat groups of trained, disciplined militias. They need to capture and kill solitary victims.

The Minutemen are a good model to use. If one patriot is notified of a BLM attack, they notify others who can quickly assemble against them. BLM is trying to grab weapons and whatever they can use to fight their revolution, and a solitary hero will become a dead hero in short order.

The People, United, Will Never Be Defeated.

Fight Back. Work Together. Form Alliances. Whatever our differences, if we remain divided, BLM will pick us off one by one.

Together, we can stop the communists in their tracks!

It looks like the person robbed and beaten by BLM protesters in downtown Portland tonight is a trans woman. She pleads for her backpack back. Her longboard was also stolen. She may be transient. The man who tried to protect her was later beaten himself & kicked unconscious. pic.twitter.com/uNrgCkevUt