So how many of rape accusations are genuine?

No-one knows.The figures are completely variable, and largely seem to reflect the politics of the source. Even the most sober sources vary from 1 to 90%. This would not be tolerated in any other area of science.

And yet what do Feminist commentators claim?

"The idea that most or even many rape allegations are false is an extraordinary claim requiring extraordinary evidence. Those who continue to insist otherwise have forfeited any right to be considered good people." (source)

Now, we know people lie. It is mundane to see people lying about all sorts of matters from who ate someone's lunch at work, to whom committed murder. It is an awfully strange thing to say that lying about rape is an extraordinary claim.

To ignore these is the opposite of reason. Believe me, or you are evil, and I will shun you. Only a wicked person would disagree with my divine truth.

Let's compare it to the scientific studies: 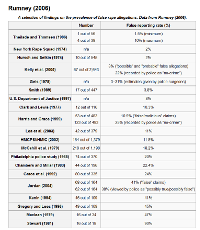 That's the sort of information that rings alarm bells in scientific establishments. It means you have to decide the methodology from scratch before doing the testing, and there should be general consensus on both.


False rape allegations were investigated from 1978 to 1987. A ranking police official notified the investigators whenever a rape charge was declared false and provided records of the case.

In the study, 41 percent of the total disposed rape cases were officially declared false. The incidence figure was variable from year to year. The data showed that all the complainants were white, largely of lower socioeconomic background, and a majority was modestly educated.

The study of the 45 cases of false rape allegations led to the conclusion that these false charges were able to serve three major functions for the complainants: providing an alibi, a means of gaining revenge, and a platform for seeking attention/sympathy.

This tripartite model resulted from the complainants’ own words during recantation and does not constitute conjecture.

False rape allegations are not the consequence of a gender-related aberration, as frequently claimed, but reflect impulsive and desperate efforts by women to cope with personal and social stress. (source)

We need to apply the same standards to investigation of this matter that we would any other scientific investigation. This is a matter of life and death, of lifelong misery if victims are disbelieved, whether they be victims of false accusations or genuine sexual assaults, male or female.


Clubber 'cried rape in fit of anger after man took too long to find his car'
https://archive.is/ddkMM
Saved from    http://www.mirror.co.uk/news/uk-news/comfort-yinusa-clubber-cried-rape-5804402