A Feminist interpretation of Hetero-Sex 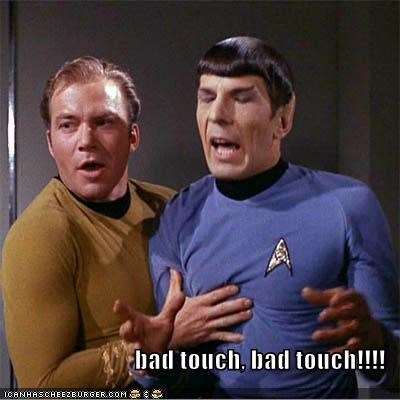 When women have lesbian sex they can speak up or communicate non-verbally, when men have gay sex, ditto, but as soon as a woman meets a man her brain shrivels and she gibbers fearfully as his rape hands touch her?

I don't want to go near a woman who thinks like this. I want to trust that my partner will be my equal, and not see me as some psychopath teetering on the edge of raperaperape.


Establish a safe word and/or a thing like three taps if words will be difficult, and get bizzy! If you are talking, you are thinking, not feeling, which can be fine.. but this article makes it mandatory to be chatty all the way through!

The new Feminist-approved 'script' is

May i kiss you?

May i kiss your neck?

May I kiss your neck a little lower?

May I kiss your left breast?

May I kiss your right breast?

sorry, I had to stop, I was just too turned on.

Because in this reality, the script is two or more people do things they want and trust the other person to pull the plug, or communicate when they want something else to happen which might involve body movements (hands pushing head down) or verbal communication.

They don't involve a checklist designed to enforce female supremacy and reinforce the idea that all men are filthy rape-monsters only barely held in check.
Posted by Brett Caton at 12:31