First, what is the aggressor? The aggressor as defined by Black’s Legal Dictionary:


The party who first offers violence or offense. He who begins a quarrel or dispute, either by threatening or striking another.

Very simple and straightforward. Clear, unambiguous wording. You start the fight, you attack, you are the aggressor. This definition caused problems when in the mid-80’s several states started adopting mandatory arrest laws.

Mandatory arrest laws require that officers responding to a domestic violence call, arrest the aggressor. The Aggressor at the time of these laws inception, was defined as above. It is important to note it was feminist groups, mostly advocates for battered women, that pushed for these mandatory arrest laws, it will be vital in understanding what happened next.

After these mandatory arrest laws were enacted, they immediately backfired on the advocates of battered women. Drastically so, while the arrest rate for men climbed by 37%, the arrest rate for women skyrocketed by 446%. This was unacceptable, advocates started claiming that women being arrested, remember the definition above is what they were using, was re-victimizing them.

To fix this “problem” Predominant Aggressor Laws were created.  These laws created a set of guidelines designed to ignore the legal definition of Aggressor used up until that point, and impose a new one. The list of guidelines is long and incredibly biased against males. Owing in part to Sexual Dimorphism, and in part to culture.
The male will almost always be older, taller, and heavier than the female.
Men are much more likely than women to have a criminal history, men make up 93% of prison population.
Has no bearing on the matter at hand, just because a woman was the aggressor the last 3 times, doesn’t mean she is the aggressor now.
This is evidence supporting claims. It is also redundant with other guidelines.
This assumes that all persons will react the same to the same stimuli. Some people respond to abuse with fear, or anger, or in my case.. Calm.
These can be a clear indicator in some cases, but 58% of domestic violence, is mutual. Meaning both parties are likely to have both sets of wounds.
Incredibly biased against men, due to sexual dimorphism. A male defending himself is likely to do more damage to a female, than the female is likely to do to him.


Example: My wife pulled a knife on me, to protect myself I grabbed the wrist of the hand holding the knife, I sustained no injury, but I bruised her wrist in the process. (this actually happened)

As a general rule of self preservation, both parties have a motive to lie, if only to keep themselves out of jail.  They will likely both accuse the other of being the aggressor.
Another guideline biased heavily against men. As men will almost always be stronger.  Skill is ambiguous, as unless you see them in action or they admit to training, you have no real way of knowing.
I find this to more of an indicator testimony will wholly unreliable, rather than an indicator of who was the aggressor.  Who is to say the sober one didn’t start the fight because they were angry at their partner being drunk/high?
This is a good factor to consider. The person calling for help is more likely the person who needs help.
Another ambiguous guideline that leaves the interpretation completely up to the arresting officer and his own bias.
By all means, if someone is violating a protective order, arrest them. Just make sure you arrest the person who caused the violation. If the person under the order goes near the party he is not allowed, arrest them. If the protected party follows the accused into a store forcing a violation, arrest them.
This will come down to a he said she said spat if there are no reliable witnesses nearby. Once again leaving it up to the arresting officer and his potential bias. 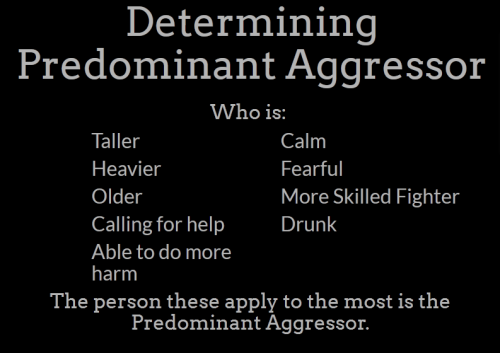 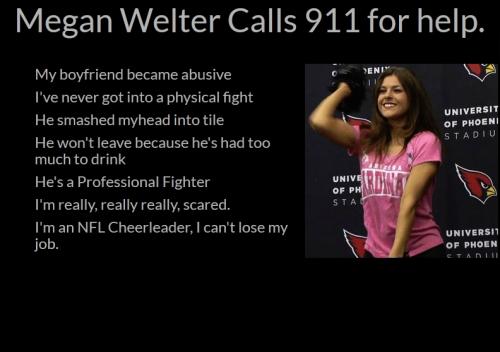 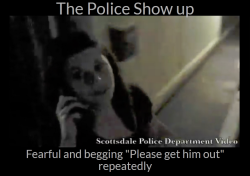 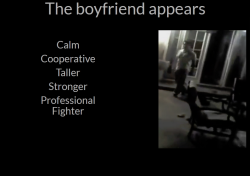 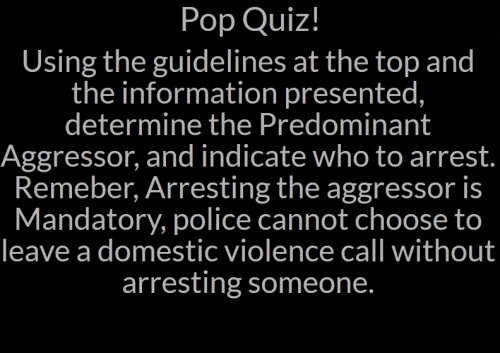 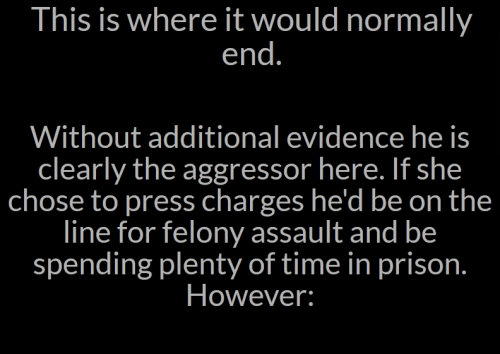 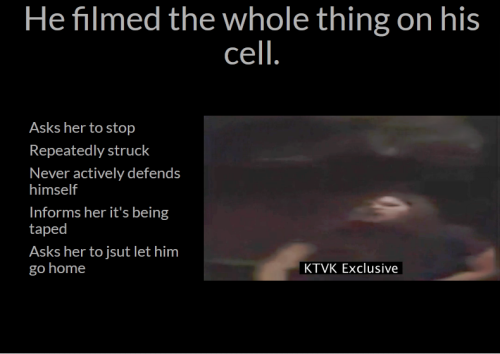 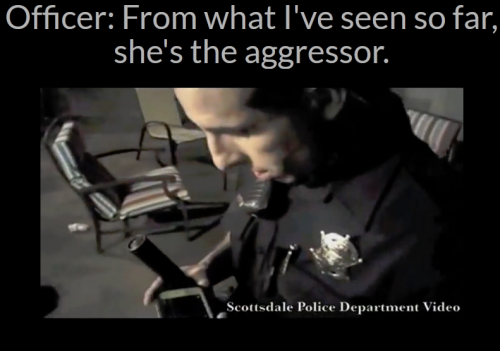 The 911 Call
The Police Video

The Cell phone video (at bottom)

This is the problem with Predominant Aggressor Policies.