"The fact that you can only and absolutely focus on school shootings, which are very emotional and gripping events, and avoid discussing mass killings at schools and churches and on airplanes and in night clubs and other places that did NOT involve firearms indicates that you are either a shill for some anti-gun group or you are simply someone who has absolutely swallowed the propaganda being distributed about guns."


I'm trying to think of any of those mass-killing in Australia.

Nope. Maybe I was asleep or something?

Yep. We could see us heading down the American path. We said Nope.

" Australia’s rape rate (as reported by Australian government) is **fourteen times higher** than the rape rate in the U.S."

If true (and no reference is ever given so I'm not going to bother debunking if you can't be bothered presenting anything to check in the first place), then there's still no connection.

Most rapes happen from people you know.

Are you actually advising people to carry a drawn weapon at all times in case their spouses or friends attack them?

You realise almost all rapes are actually carried out by a minority, our Aboriginal population, which is why we staged The Intervention, which is effectively martial law for one racial group?

Tazers are weapons, yes. It's pretty easy to attack someone with them, harder to defend. They kill people. And either this website is lying or pepper spray is legal in WA. State laws vary.

But walking sticks? I'm sorry, what the hell are you on about? Seriously?

" or _screwdrivers_. There is a higher penalty for carrying a screwdriver “without a lawful reason” in Australia than there is for mugging someone unarmed."

Yeah. You can't just carry burglary tools. Are you on your way to a job? That's fine. Going to fix a friend's door? Easy to check, police call friend and ask about door. Context matters.

Screwdrivers are a great murder weapon btw, so if you do see someone on the street walking, screwdriver in hand.. get the fuck away.

Even if they are just going to repair something, they can trip and impale themselves or someone else. It should be on a belt or in a bag, not in someone's bloody paws.


"You will literally face higher legal penalties for walking down the street with a screwdriver in your hand to fix your neighbor’s screen door than you would if you mug that neighbor and take their wallet and phone."

Literally, you will not.

21C—Offensive weapons and dangerous articles etc
(1) A person who, without lawful excuse— (a) carries an offensive weapon or an article of disguise; or (b) has possession of an implement of housebreaking, is guilty of an offence.


(a) for a basic offence—imprisonment for 15 years;


(b) for an aggravated offence—imprisonment for life.

"Gun crime has not dropped dramatically in Australia since the implementation of gun control."

Australia's always had gun control. Every time new weapons have been invented, it's only been tightened.

(We only started in 1900 btw, so if you can find some law since Federation saying you can own any weapon, feel free)

We tightened it up a bit. The problem is that guns get shipped in from overseas because, i dunno, some countries make an awful lot of them, not naming any names, we're all friends here AMERICA but you don't seem to be very good at keeping control of the weapons you make.

Hmm. Looks like in NSW the line for gun crime is.. going down?? 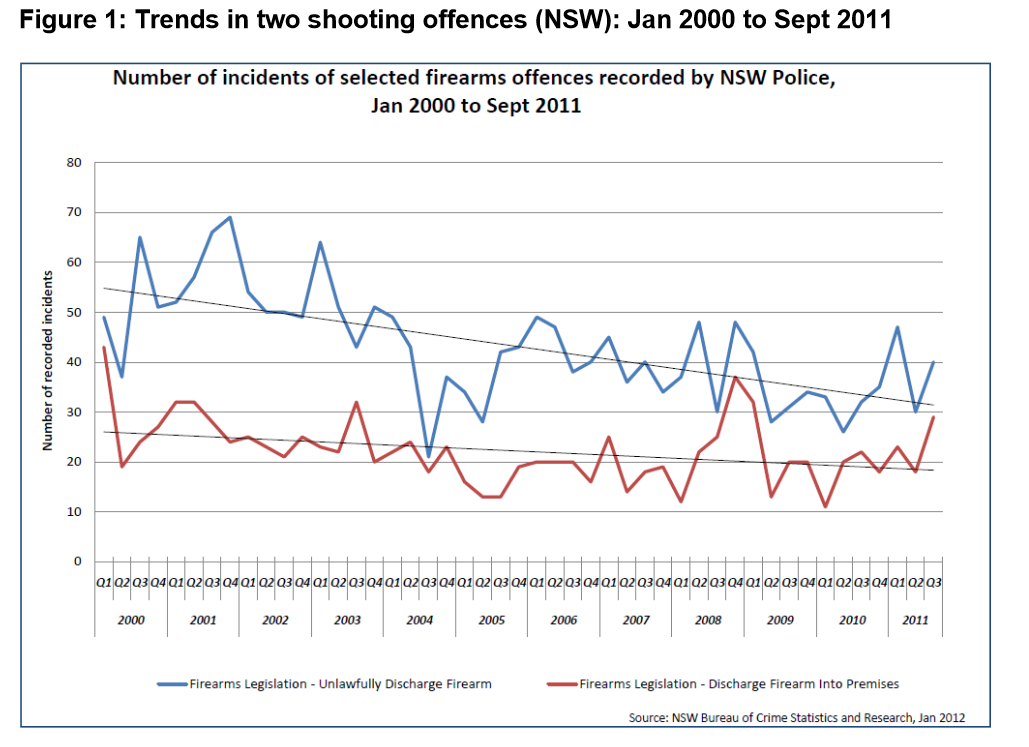 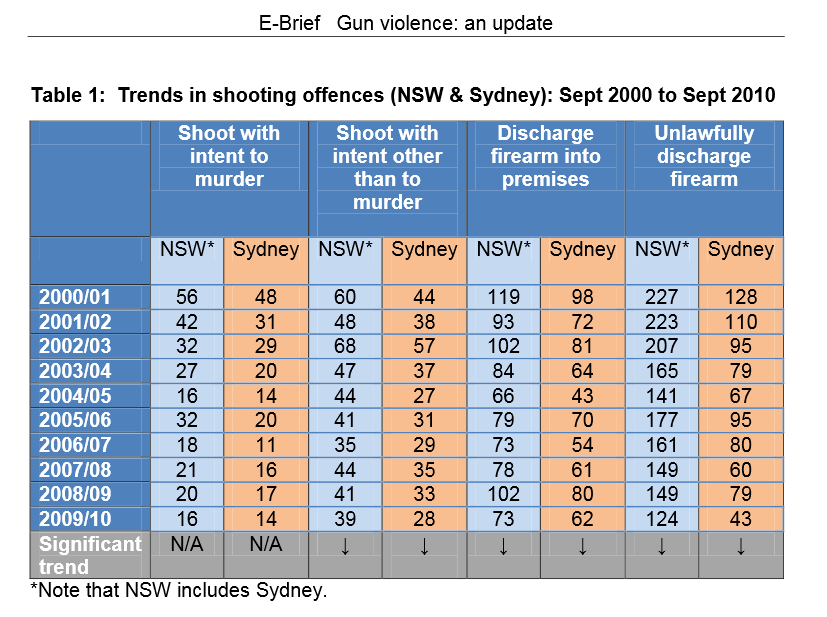