Feminist bashes man for dissenting - her Sisterhood cheers her on. 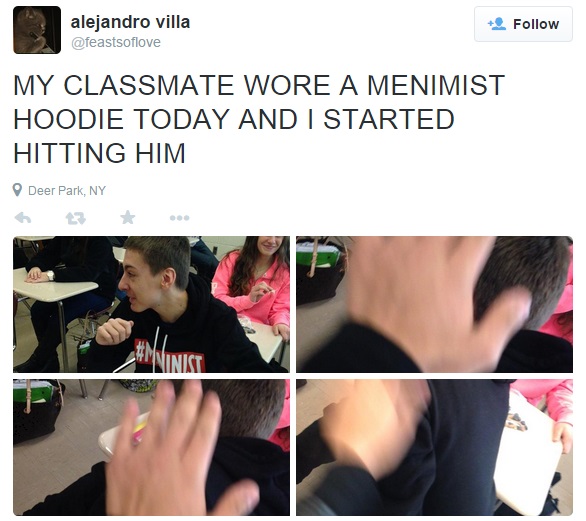 So much for “hating feminazis”, rainbowsfuckyourface…

You liar; given a chance, these are the people you support; fascist bitches who will bash anyone who disagrees with them.

Except for the fact that “meninists” don’t fight for anything except for the friend zone being gone. A concept that isn’t even real.
At this point this is harassment and I have cops at my disposal that can track IP addresses and find you.

"Except for the fact that “meninists” don’t fight for anything " .. well that part was right - it's a parody, you dolt - a mirror image of feminism, to show how absurd that movement is - and how does your kind react?

You are so convinced you are persecuted but the fact is, your movement is so revered it is State funded - no other political movement would dare to ask for that funding

It is now taught in schools to little kids as FACT I can't imagine the outrage if the political philosophy of the Republican Party was taught like Feminism is. It's now the de facto State Religion - despite being in supposedly secular states.

"At this point this is harassment and I have cops at my disposal that can track IP addresses and find you."

Your posts are in a public place - as I have already pointed out.

You think I'm harassing you? The Tumblr Staff say otherwise.

Find where I'm violating the TOS. Report me.
The fact is - as your own violent post demonstrated - you hate Free Speech, and seek to intimidate me with threats of violence.


I'm waiting for the part where you tell me your dad is a commando-ninja, and he will use his drone-swarm to shoot me with missiles.