What are MRAs doing for men? Reblogged from "A Voice For Men" 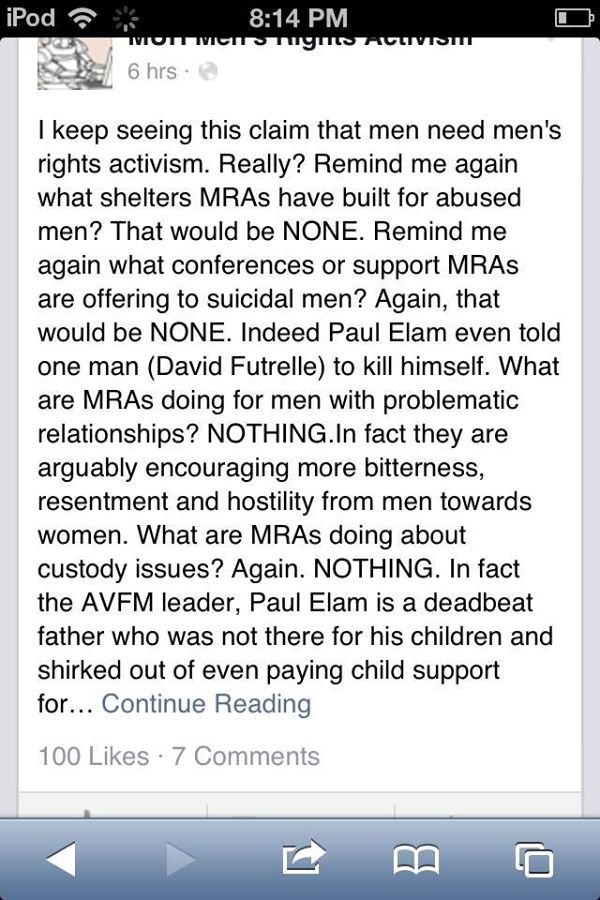 A Voice for Men

Here is something that was shared with us a while back. Please allow me to respond to some of these questions.

1. "Remind me again what shelters MRAs have built?"


MRA Earl Silverman was building one of the first men's shelters in Calgary. Feminism stood by as Earl struggled to get any type of funding. MRAs, while being shouted down by feminists tried to promote, support and find funding for this venture. The same with the Canadian Centre for Men and Families. The one that feminist organizations tried to obstruct, spoke out against and did nothing to support.

2. "Remind me what conferences or support MRAs are offering to suicidal men?"

We held lectures at the University of Toronto that were shut down on several occasions under violent protest from feminist organizations (Big Red - remember her - the one that laughed in another human beings face about male suicide, that you claim we are doing nothing about?).

Janice Fiamengo has held lectures at the University of Ottawa that were shouted down and disrupted by feminists.

Daniel Perrins is walking 75 miles for mental health with the Chief of the Hamilton Police.

As soon as feminism quits obstructing our efforts here, you will see more of them.

3. What are MRAs doing for men with problematic relationships?"

We are trying to convince the social work and social services community to recognize men's issues such as domestic violence against men and sexual related crimes against men. You might know this if you had ever been to our page where we publish a significant amount of material related to this.

We air shows on AVFM radio, Google Hangouts. Shrink4men is featured on our page as well as links to "Say Goodbye to Crazy".

You can access books such as "The Way Men Heal". Problematic relationships is the bulk of what we do and discuss here.

Email ThisBlogThis!Share to TwitterShare to FacebookShare to Pinterest
Labels: A Voice For Men, MRAs, what do mras do for men