Take a Dyson's sphere (empty) as a hypothetical example. Make it 10 light seconds across. (i.e. 5 light second radius). The sphere has surface features which change with time - like solar flares do. Machinery is dedicated to repairing asteroid strikes.

Ok, think about a 'mountain' - a surface feature jutting out of the sphere large enough to be seen from orbit.


Beta and Gamma have watches synchronised. Ignore gravitational effects on time (we cannot guess what the sphere weighs).

The both travel to different sections on it's 'equator' from the centre and up inside the mountains. These are placed the furthest apart you can be and still be in the field of vision of an observer in space - i think that is about 5 light seconds, but I might be misunderstanding the issue and it might be about 7. ( Right angle triangle, a, b 5 light seconds in length (from the radius), so hypotenuse is square root of a^2 +b^2 = root 50 = 7)

An equally damaging explosion - that will take equal time to repair-  has occurred at each mountain, recorded to have occurred at the same time from the PoV of the centre - perhaps enemies are responsible for such precision.

Beta and Gamma initiate repairs then leave their mountains and travel perpendicularly to observe it taking place.

My understanding is that Beta will see Gamma as being 5 seconds (or 7?) behind schedule, and Gamma will see Beta as the same time behind schedule. Whereas if Newton had been right and light had been instantaneous, then the time lag between furthest and nearest parts would be the same. Beta and Gamma would then both see each other's progress as equally on time.

They travel back to the exact centre when their work is complete. Comparing watches, they find each was synchronised, they arrived at the centre at the same time, and yet recordings from the surface clearly show the other as being behind time.

Is this correct? If so I'd like to consider what would happen if a signal pulse, switching on and off, sent from the centre were to inform the surface to light up in colour briefly. How would that look like? I think that under Newton, the whole globe would wink on and off simultaneously - but Einstein means it would appear to someone at a reasonable distance to have concentric rings of light on it's surface? If so, would they appear to move in towards the centre - or out?


I used to know physics but only at high school level and a little bit at uni. So I am rather out of my depth.

I was reading this explanation of tidal bulges.


@DoctorKarl there is no centrifugal force - the only force in the system is gravity, which points from the earth to the moon.
— Geraint Lewis (@Cosmic_Horizons) June 14, 2015


A copy of the Earth orbits a copy of the Sun, but one safely compressed into a Black Hole.

Would Earth equivalent orbiting a black hole would have extreme tides compared to Earth? In other words, does the diameter of what is orbited make any difference?

I'm focussing on gravitational gradients. The Sun is a gigantic object, very far away, of relatively low density on average -  about 1.4 g/cm3 or about 1.4 times that of water.

Even though the Sun is 391 times as far away from the Earth as the Moon, its force on the Earth is about 175 times as large. Yet its tidal effect is smaller than that of the Moon because tides are caused by the difference in gravity field across the Earth.

The Earth's diameter is such a small fraction of the Sun-Earth distance that the gravity field changes by only a factor of 1.00017 across the Earth.

The actual tidal influence then is then 44% of that of the Moon.

I did some more reading... http://physics.stackexchange.com/questions/121830/does-earth-really-have-two-high-tide-bulges-on-opposite-sides

Then gave up. If I weren't perpetually muddled by sleep deprivation, perhaps I could figure it out, I cannot for the life of me remember if the sun is treated as a point source or if the density of it makes a difference. The part of the sun that is nearest to us and that part farthest away is still close to being irrelevant compared to the distance of our orbit, surely?

Unless you are talking about something like the future of our sun, where it's radius will swell enormously. The effect of the furthest part has to travel at the speed of light, and will pull in a slightly different direction to the nearest part....I think. Ugh.

"One consequence of the initial changes is that the Sun is becoming brighter, hotter and larger. "
Yes, you have to ignore the fact the oceans will boil off - in any case, tidal effects work on magma and rock. It's easiest to see them with water, however.

"As the Sun expands it also loses mass in the form of a wind of particles. "

So we have to ignore that as well, as we are simply changing the radius (and hence density) of the Sun while leaving other factors equal. Assume the parallel Sun swells to a significant percentage of the para-Earth's orbit.

What about the Moon? Were it compressed to a black hole, or expanded into a larger less dense object (by being converted into a Death Star for example!), would there be different tides? (ignoring light pressure effects et al)


I had a shower pondering all this and realised part of the problem is that relativity is downright weird.

Consider the case of a hollow sphere, like a Dyson's Sphere, 10 light second across (for simplicity's sake; yes, you have to ignore material stresses). You are in orbit at 10 light second's distance.

(Later we will consider an orbit, but the distance required depends on the mass of the object, which is impossible to even estimate as far as I can see).

If Newton had been right, and light was instantaneous, it would look like a ball still. But he was wrong! The furthest side is 1 second further in the past than the nearest. If that ball changed colour, had Newton been right , the colour change would be even.

However, instead, a pulse of colour change will radiate in a wave from the nearest point. One second after it starts, the farthest section will be that colour, from your perspective.

The person at the centre sees a change from green to blue to red in all directions.


Looking down the page at the illustration is to see a simplified approximation of the perspective of the viewer at a distance. Imagine the distance between each 'slice' to be 1 light second more from the viewer. The slices would really be arcs, curved rather than straight, but I can't easily create that graphic.

The compass bearings are symbolic and for orientation only - they are not a part of the structure.

It the object is translucent, or a mesh, the colour green would interact visually with the intermediary hues and intensities of blue and red; it would be a stunningly beautiful phenomenon. 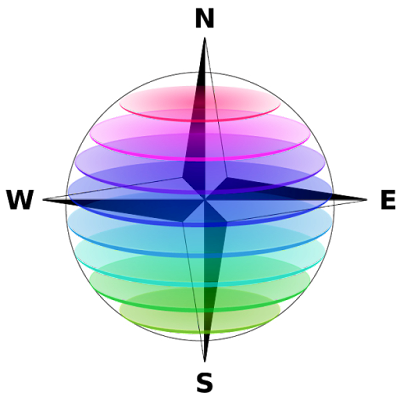 
If you were sitting at the exact centre, it would appear that all parts were changing colour evenly. Green, to Blue, then Red.

Now consider being in orbit. Your angular velocity will sheer the object's appearance. It won't look like a ball! From your orbit, as far as I can tell (and please feel free to correct me!), the further parts will be shifted in the direction of travel.

Imagine your orbit is clockwise around this ball. Take the time you are at the apex - our 'North'. The green 'slice' is shifted compared to the red 'slice'. Why? Because you are looking back in time. The yellow-green slice is 1 second in time behind the green slice second from bottom, and seven behind the red slice.

I can't show the view properly, but if you can imagine looking 'down' from the north, hopefully you will get the picture.


Perhaps if the surface was translucent - violating the point of a Dyson's sphere! Then presumably you could have all the rings of light visible, with the colours adding according to http://www.physicsclassroom.com/class/light/Lesson-2/Color-Addition 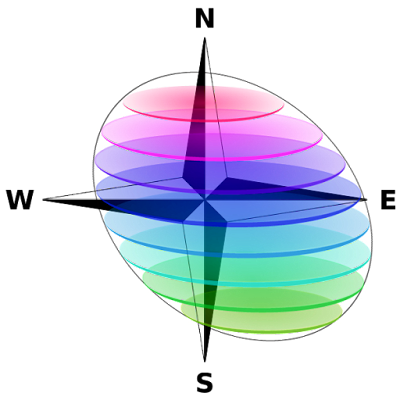 Diagram C:
Here is an example of concentric rings - too many for our purposes, we would see four at most from a sufficiently high orbit. (You can only ever see a hemisphere at best.)

I expect 1 lightsecond's distance from the surface is far too close!


The outermost rings would be blue, the innermost green and red.

So if the rings are aligned, then it would be a yellow ring appearing towards the centre.

I presume Diagram A approximately reflects the Point of View of travelling to the surface at a constant rate.


Does Diagram A or B reflect the PoV of someone in orbit more accurately, assuming the orbit is no significant fraction of lightspeed?

If so, how fast would you have to be travelling for the appearance to be this distorted?

Have I even illustrated this correctly? I think not, but i really cannot sort this one out - yet it nags at me.