Paizo will decide what YOU may play! 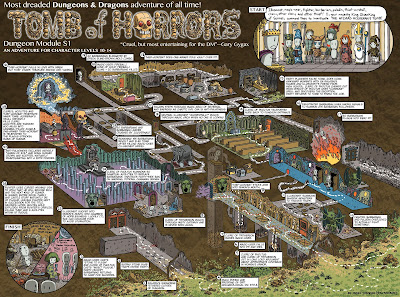 Tomb of Horrors, from the days before SocJus controlled Tabletop Gaming. This really was truth in advertising.

Lots of fun for sadistic Dungeon Masters tho'!

Wow, found out Paizo (maker of the D&D like Pathfinder Roleplaying Game) is controlled by Social Justice, and has now pressured DriveThruRPG into a forum policy where questioning feminism gets you a ban.

It’s a ROLEPLAYING GAME SITE. Why on Earth are they monitoring it for antifeminist thought?
Original D&D would never be allowed by these soulless bastards. They suck the fun out of everything.

Poor Gary Gygax; his products survived the religious fundamentalists, only to be buried by these neo-communists.

amazonchique
We’re not RUN by social justice, we just have a sizable percentage of our staff that believe that women, queer people, and racial minorities are humans beings with interesting stories to tell and have every right to see themselves reflected in entertainment products.

You realize the absurdity of inferring from a mild liberal leaning that a for-profit company is a communist front, right?

jessicalprice
But Crystal, there’s no way women and/or queer people could get jobs in games if there weren’t some sort of communist affirmative action thing going on. *eye roll* Gary Gygax himself said that women’s brains aren’t suited to gaming, and as we all know, he was an expert on neurology.

masterofbirds
more reasons to use DriveThruRPG when we publish Apocalypse imo

tatiletotesamaze
Doesn’t Pathfinder only exist because of the communist-like open sourcing of D&D 3rd and 3.5's D20 system?

brett-caton
There’s nothing Communist about it. You don’t know anything about those systems. Pick up a history book not written by SocJus. Read.

Anyone (any artist) who diverged from the accepted policies of Stalin – became an enemy of people and must be condemned or sent to GULAG. What was accepted by the propaganda?

The art, had to “correctly” depict the “reality in its typical features”. This meant the art, which could show people at work and being happy – the art which was simply Propaganda.

Creative works (including literature, games, etc) in authoritarian regimes have to be approved by the Central Committee, which dictates whether or not something can be published by whether or not it promotes what the self-appoint moral authority dictates is good.

Open Source systems would be regarded as subversive - and banned.

Like Paizo is doing, to the limit of it’s reach.  SocJus doesn’t have as much power currently - more than the Christian fundamentalists ever had, mind - but neither did other authoritarian movements at the start.


National Socialism, for example, didn’t spring fully formed into being - it crept in over decades, centuries if you count the anti-Semitic forebears. It didn’t achieve political office until towards the end.

Cancers have to be treated early. This one can’t be allowed to grow.

Celebrating banned books
http://www.dailykos.com/story/2009/09/30/787864/-Celebrating-banned-books
What this boils down to is that a small group of activists have decided that they know better than you what you and your family may and may not read for free.

They have decided that they or their kids will not read a book, so no one else in town should have free access to them either.

Allow me to more frank on that point: They think they are the moral arbiters of the town.

You might have visions of ultra-conservative, Freeper types leading the charge to rid the local library of Harry Potter and its Satanism lack of a mention of Christianity. Certainly that happens


Book burning of Harry Potter novels in Penn Township http://s434.photobucket.com/user/mcgannc42/media/bookburn_penn.jpg.html
Recent book burnings have been documented in Michigan, New Mexico, and Pennsylvania. The photo above is from my home state of Pennsylvania. In Maine, the burners could not get the fire permit. (LOL @fail)

But this is not the whole story. Too often, these challenges come from the left.