SocJus calls for a new genocide - starting with the Jews?

Joy Karega is a prominent Feminist - she has eliminated her social media so this can't be directly confirmed but if you examine this and search by her surname, you'll see she is an honoured guest at their conferences.

I've been saying this for a while - the postulate of 'Patriarchy' is a copy/paste from old Nazi propaganda, and they really should be done for plagiarism. Jewish men are still the enemy in Feminist  writings. If you look at old Nazi propaganda, they never focussed on Jewish women as being the enemy, any more than Feminism does. 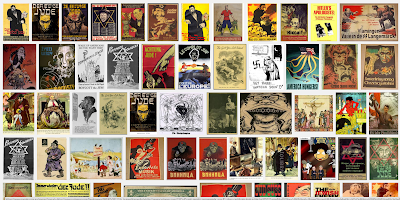 
Jews are copping it from the Right and the Left now. The Right says they aren't white - and so the enemy - and the left says they ARE white - and so evil incarnate, because all whites are The Devil (except white female feminists, naturally).

You cannot win with these people!

Recently, Buzzfeed, a flagship for Feminist thought now, did a special where they asked SocJus what they thought of white people. The disgust on their faces was identical to that of antisemitics discussing Jews or homophobes discussing homosexuals.

And it's important to remember - Jewish people are white! Unless you are a neo-nazi or KKK, in which case they are magically un-white, because raisins.

But Feminists will argue that they cannot be racist, since they defined racism as "something other people do but not Feminists".

They make constantly excuses to reward themselves for being bigots and inciting race hatred. They use the term Patriarchy in exactly the same way the antisemites used "The Elders of Zion" as their bogeyman. Something never proven - something so 'true' that even questioning it marks you as one of the enemy to them.
Posted by Brett Caton at 17:50