"Safe Schools" - nothing to do with bullying, despite the lies of it's marketers. 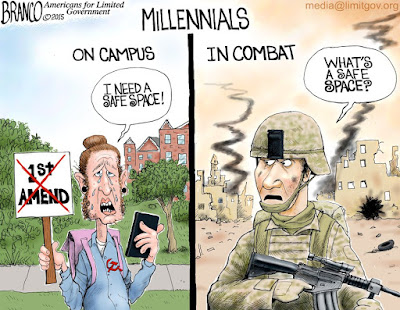 Continued from: Why do Feminists teach children that Heterosexuality is abnormal? 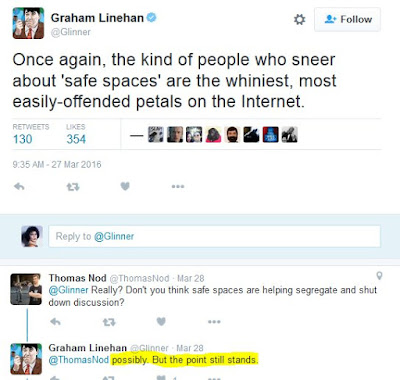 Even Social Justice Warriors acknowledge that safe spaces are there to stop free speech, not keep people "safe".

Section 6c of the safe space policy is defined as:

"'Refraining from hand gestures which denote disagreement or in any other way indicating disagreement with a point or points being made. "

Molly described an incident when, singled out negatively for being Jewish, she felt unsafe. According to Molly, the facilitator responded that Molly could feel victimized for being female, but “being Jewish didn’t constitute grounds for systematic oppression.” (source)

http://www.safeschoolscoalition.org.au/app/theme/default/design/assets/all-of-us/documents/unit-guide.pdf
Wow. So this was going to be taught to children as fact in the schools?

This is Social Justice propaganda.

If parents want to take their kids into special religious classes to learn this sort of thing, fine, but to treat it as if it was a secular subject is outrageous.
Look at the materials for something that is sold to the public as a way of stopping bullying...

" In order to create a more inclusive school, it is important to make sure thatyour classroom is a safe space"

Note: Safe Space is another Feminist theory. Essentially the idea is disagreement is dangerous. We must learn to conform - to their beliefs, naturally

Discussion Questions
1.
How do we respect everyone’s ideas, thoughts
and feelings during class discussions?

We don't. We don't have to respect anyone. All we have to do is behave with courtesy until that no longer is appropriate. And Feminists certainly don't respect non-Feminists - the usual response of any Feminist to non-Feminist thought is abuse.

3.
How should we ask questions of each other?


Cults do this a lot: they turn public meetings into confessionals. Then, of course, they use the confessions against the nonconformists. This tactic exists to persuade the children that they have confidentiality - where none exists, and where the teachers are quite free to report anything they hear.

5.
How do we use appropriate language when talking about topics related to LGBTI people?


The control of language is very important to Feminism and other totalitarian movements - Orwell called it "newspeak". The idea is that by limiting the language and twisting the meanings of words, thought could be reduced and freedom eliminated.

Why do Feminists feel that English is inappropriate for children? Could it be because if they speak it, they can say those terrible words: "heterosexuality is normal"?

I could go on - but every paragraph of this document supports my earlier belief that this program is a Trojan Horse. Feminists want to have the ability to indoctrinate schoolchildren before they gain the ability to question for themselves.

Catch them early enough, and you can make them believe anything - for life.


Feminists claim that children must be taught to be Feminist, or gay males will be harmed - but Feminism is no friend to gay men, and claims Gay men don’t face oppression.


Feminism hates them as well, naturally. But it lies- the lie is everything, it is the propagandist's path to power.

Now one of the things I find puzzling about it is that, when I look at the House of Lords debate on this legislation, those I agree with most are the radical right. Particularly the person I find that I agree with most, in here, and I’m not sure he will be pleased to find this, is Norman Tebbitt… Tebbitt also says that the savage mutilation of transgenderism, we would say if it was taking place in other cultures apart from the culture of Britain, was a harmful cultural practice, and how come we’re not recognising that in the British Isles.

Today the Frankenstein phenomenon is omnipresentnot only in religious myth, but in its offspring, phallocratic technology. The insane desire for power, the madness of boundary violation, is the mark of necrophiliacs who sense the lack of soul/spirit/life-loving principle with themselves and therefore try to invade and kill off all spirit, substituting conglomerates of corpses. This necrophilic invasion/elimination takes a variety of forms. Transsexualism is an example.