The BBC proclaims: "only religious fanatics would oppose Feminism!"

" the Aurat (Woman) Foundation, said that every day of the year, six women were murdered, six were kidnapped, four were raped and three committed suicide."

At a wild guess - correct me if I'm wrong - but the male stats are going to be MUCH higher.

"One analysis of suicide reports, based over a period of two years, showed over 300 suicidal deaths in Pakistan from 35 different cities.[1] The findings showed that men outnumber women by 2:1"

76.7%!!!
So an egalitarian movement would be concerned about the violence against men, and a partisan movement only against their group - women in this case.
"Dowry-related violence " is a good argument to get rid of dowries, they hurt everyone. Men are imprisoned because of them, did you not know that?
"and acid attacks are in addition to that" ... which happen to males as well - and are perpetuated by females. Acid is a cheap, readily available weapon of terror and is employed for cultural, not religious, reasons.

"Over the decades, successive laws have sought to improve the position of women, but implementation has been lacking because it is mostly in the hands of male government functionaries"

And the evidence the BBC presents for this hate-filled opinion is... ?


None at all. They want us to Listen and Believe.
So why do they do it? They are setting it up as a war between men and women - which of course, leads to the obvious question: why doesn't the BBC openly advocate sexual segregation as a solution?
The BBC will never do that, of course, because if women are in charge of women, then the problems of women would be the responsibility of women - instead of their favoured bogeyman, Patriarchy.
"The law also envisages the setting up of a universal, toll-free dial-in telephone number for women to call if they want to report an abuse."
Which will then be used as proof that all incidents are against women - because no instances against men will be recorded. How convenient.
"They say the new Punjab law will increase the divorce rate and destroy the country's traditional family system."
Yes, that has been a goal of the Feminist movement since the 1960s and was openly stated by many of it's leaders. Not sure why that's regarded as somehow a religious issue.
It's like saying "religious groups say communist groups aim to destroy capitalism!"

Here's an idea: something is right or wrong regardless of who says it. 2+2=4, even if Hitler or Hitchens is the speaker. The truth is the truth.
"A woman can ring up a toll-free number for help, women protection officers can enter any premises to rescue her, and the husband is constrained by the law from throwing her out of his house. If he remains violent, he can be turned out of his house, and forced to wear a GPS tracker "
So on her word, and that alone, without any trial, he loses his home, he is automatically regarded as guilty and has his free movement curtailed.
And if she does the violence? http://pb.rcpsych.org/content/35/1/33.1

Gosh. No consequences. How shocking. 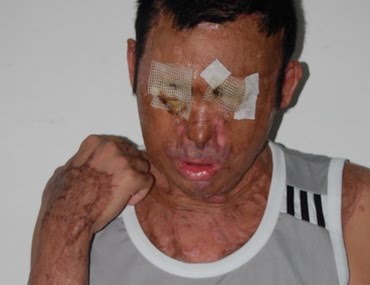 "If implemented, these measures will fundamentally change the traditional power equation between men and women"
Imagine if those laws were implemented with blacks and whites substituted. They would be regarded as vile racism. Yet it is fine with a supposedly egalitarian movement to classify men as monsters and women as helpless damsels in distress, who could never lift a saucepan or a knife with malicious intent.
It's blood libel. It's a lie, it's known to be a lie, and it's repeated because it is a useful lie.
"Additionally, such a move could give a fillip to social radicalism "
Absolutely. If you want to push men into terrorist movements, this is a great way to do it. Of course, you will then have a terrorist army in charge of nuclear weapons. I am sure that will be just fine.


Seventeen-year-old Zeenat Rafiq was doused with petrol and set on fire by her mother, Perveen


Acid Attacks: Telling Only Half the Story
Posted by Brett Caton at 18:41