Part One is here


Not all men like giving oral? Will Lloyd explains his PoV in: "Why I don’t go down on girls"


Have you guessed the answer?
The same one that advocates things like withholding sex when it suits them!


"Myth 7: All lesbians love and are good at oral sex.

They don't and aren't. I'm not knocking oral sex; it's great stuff. But some lesbians simply don't care for it." (source)

So how do Feminists react to a man who behaves like a lesbian, saying no to something he prefers not to do? 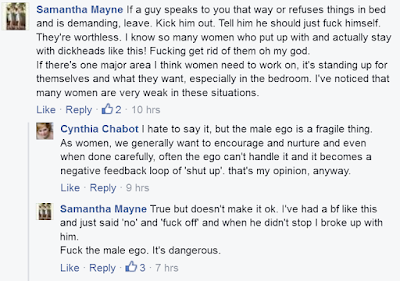 "If a guy speaks to you that way or refuses things in bed and is demanding, leave."

If a man refuses you, leave? Good advice. I think all Feminists should leave - rather, I think it's best that they just wear a warning armband with a Feminist logo. Any sane male will know to run like fuck.

"Kick him out. Tell him he should just fuck himself. They're worthless."


Tell me again, Feminists, how yours is a movement of equality? Tell me again how it's not about hate?

I wonder if women have equivalent feelings?

And what does that Feminist say to women who don't like giving oral?


"I Hate Giving Blow Jobs.  Never again will I buy into the idea that love means doing anything and everything to satisfy your partner." (source)


"I know so many women who put up with and actually stay with dickheads like this! Fucking get rid of them oh my god. "

He's a "worthless dickhead" and can be kicked out.

Shouldn't have said no to a Feminist. Men must learn their place. 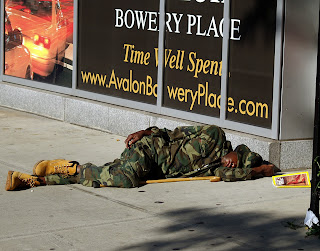 "Fuck the male ego. It's dangerous."


A feminist treats men with abuse - then projects her corruption, her own vile nature - onto them. They are born dangerous. The guy she just tossed onto the street for not obeying her every whim - is the danger, in her mind. 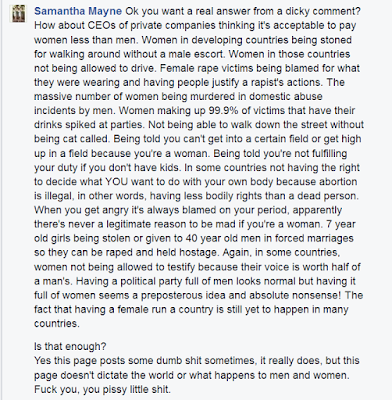 "Ok you want a real answer from a dicky comment?"

Ah. Start with abuse, and call it a "real answer". How honest of you. How... Feminist.
And... by the way... the "wall of text" technique just means you can't be bothered making your writing readable, because you know your fellow believers won't question anything you say, they just Listen and Believe 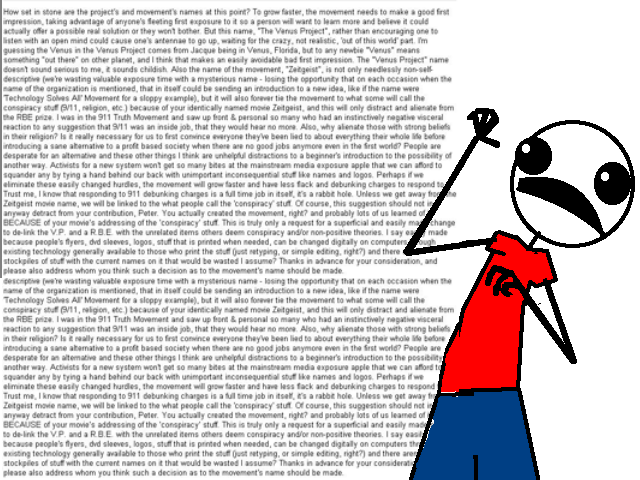 - and anyone else will immediately pull apart your arguments - but you don't care about them, it's all about making a show of giving an argument, but without any substance.

Quick! Grab a lawyer and one of the people victimised - because it's illegal! Has been for longer than your lifespan!
Now, for ten points, NAME THE COMPANY THAT IS DOING THIS.
You can't because you know you'll be done for defamation. Turns out the courts require nasty things like "evidence" and "truth" - they are soo antifeminist. Much oppreshun, hun!
Of course, In Australia, Feminists made paying men less for the same work completely legal.

Generally, Feminists have argued that Feminists shouldn't have to fight for corporate positions - instead getting them because vagina - because struggling for things is something they reserve for men.

Of course, that will drive the profits down and possibly collapse the economy, but that just means men have to work harder and harder as they take up the slack from freeloading Feminists.

"Women in developing countries being stoned for walking around without a male escort."

You mean the same countries where men are put to death for being gay, but not women? Yeah, it turns out countries without human rights are bad all around. Who knew? Of course, as a Feminist - your attention is focussed on the dude who wouldn't lick your butt.

" Women in those countries not being allowed to drive. "

You realise there are women in those countries who fight against any change because the status quo means a male has to act as their driver? They do manage to get out a lot - you just don't talk to any of the women from those countries. Being a Feminist, you talk at people, not with them.


In Saudi Arabia, not being able to drive often brings women a privileged status which they do not enjoy in most other countries.

In the United States, for instance, very few women have private drivers who are at their beck and call. This status is one not enjoyed by many expatriate men who for a variety of reasons cannot drive. True, they could obtain a license to drive if they went through a number of steps to do so, but most soon decide that the procedures are not worth the effort.

Women, in the meantime, have special sections of buses reserved for them, which are rarely crowded. Families that live on compounds or work for large companies have private bus services to take them on sightseeing trips and shopping, and other families hire drivers who are on call to take the wife and family wherever they want to go.

Such privileges are not available to women in other parts of the world, and in fact, in Saudi Arabia, it is often the husband who is discomforted when he finishes work and finds it necessary to wait for his ride home, or take a taxi, because his wife and children have the car and forgot the time.

Somehow, wives find that having a driver encourages them to shop more often because they can hop out of the car downtown and let the driver fight traffic and search for a parking place. (source)

"Female rape victims being blamed for what they were wearing" is something that doesn't happen in courts. It's a feminist piece of blood libel.

"... having people justify a rapist's actions"

Men accused of rape are treated brutally - sometimes murdered on the spot. The only time it's otherwise is if the accused is female - whereupon the media will call it an affair and have a good old giggle.
" The massive number of women being murdered in domestic abuse incidents by men."
In Australia, the numbers are roughly equal.
DV is reciprocal and often female initiated - Feminists love to erase that fact.

Feminist love to erase any reporting of domestic violence by women, and have been incredibly successful in the US.
Lesbian Domestic Violence significantly more violent , but you won't hear that from Feminists.
Just like they erase Female rapists. http://brettcaton.blogspot.com.au/2015/08/feminists-call-for-reverse-rape-of-men.html, http://brettcaton.blogspot.com.au/2013/10/why-are-there-such-double-standards.html
And in genuine rape cultures - women love to get involved!

"Women making up 99.9% of victims that have their drinks spiked at parties. "


Wow, that sounds completely credible. You know, statistics that you make up sound better if you don't use the same number over and over. Try inserting other digits at random.


"Not being able to walk down the street without being cat called."

This has nothing to do with rights. Or rather, what you are saying is that men shouldn't have the right to Free Speech. Harassment is already illegal - and strangely camera shy, despite the streets being surveilled more now that at any other time in human history.

Not only that - but women do it to men, and many women and men enjoy 'cat-calling' as a compliment - because in a lot of cases, that's exactly the way it's meant to be, and it's just Feminist hatred towards men projected onto them.Of courses, Feminists themselves can't decide whether or not men should do this to them - sometimes the same Feminist will hold the opposing opinion at the same time. Men are damned if they do... - if men don't approach women - feminists shame them for that too.

"Jessica Valenti Flip Flops on Cat-calling
After writing many articles about the dangers of street harrassment, Jessica Valenti does the only thing she can do to stay relevant. Which is to write an article about how she misses the attention she received from being catcalled.

So like most feminists she is willing to stray from the narrative the moment it becomes convenient. Predictably she curses the cultural climates she lives in which forces her to judge her sense of self worth by how attractive and fuckable she is to men.

But I suppose asking for consistency and accountability is a step too far for her.


"Being told you can't get into a certain field or get high up in a field because you're a woman. "

I'm sorry, Marie Curie can't hear the sound of your whining over her two Nobel Prizes..


You, again, imagine it's a human right not to be told stuff you don't agree with. Of course, you have no evidence that this occurs other than in your paranoid imagination, and non-Feminist women - like Margaret Thatcher - don't seem to have this problem with voices in their head telling them they can't achieve things. Margaret Thatcher had no time to make excuses for her failures - she was too busy ruling one of the most important countries on the planet.


"Being told you're not fulfilling your duty if you don't have kids. "

Men are told they are not fulfilling their duty if they refuse to die for women. Now. By Emma Watson and her insidious HeForShe movement.

Out of those two, I think I'd rather be told it was my duty to create life than lose my own.

But again - CONTROLLING THE SPEECH OF OTHERS IS NOT YOUR RIGHT.

... and I have to wonder - if having children isn't the responsibility of women - whose is it, then?

How terrible! "In some countries". The reason abortion is illegal is exactly the reason I'm not allowed to blow your head off. Humans have a right to life. Human life is given higher priority than any others. Human foetuses are human, surprise, surprise.

The law will compromise over the conflict between the rights of the mother and the child, and different countries will hold the parent has all the rights, others the child must be protected at all costs. So you have a range from infanticide being acceptable to abortion being completely unacceptable.

But here's the thing: YOU DON'T LIVE IN A COUNTRY WHERE THIS IS A PROBLEM, AND YOU DO NOTHING ABOUT THOSE COUNTRIES WHERE THE CONFLICT IS SEVERE.

Instead, what do you object to?

Oh right - the dude who didn't want to suck your taint. I keep forgetting.


" having less bodily rights than a dead person"

Interesting claim. Please cite your reference that you have less bodily rights than a dead person. I'll wait. (*snigger*)


"When you get angry it's always blamed on your period"

Always by men? Never by women? It's not women who use it as an excuse, even in murder trials?
IN THE REAL WORLD THIS DOESN'T HAPPEN.

But it's now feminists who want to fight for paid menstrual leave on the grounds they are incapable of working and bleeding at the same time. Despite this sort of thing being what Feminists used to fight for - the older variety wanted equal treat - SocJus sees that as "the wrong sort of equality".


Uh huh. You're going to say that and expect that to just be believed? Maybe it's more the case that you've never had a legitimate reason to be angry; instead relying on a paranoiac persecution complex?

A Feminist will always focus on personal abuse because they have no ability to reason.

And yet they will always claim to be the Damsel In Distress, even as they organise a lynch mob.

This account engages in repeated targeted harassment of women, including me. Please report it: https://t.co/eF5XnWhCp8
— Clementine Ford (@clementine_ford) March 28, 2016


Archive of https://twitter.com/thirdwavefem from https://archive.is/uSRle 28 Mar 2016 11:46:30 UTC - see if you can spot anything that counts as "targeted harassment".

Note: targeted harassment is illegal and there are legal bodies that will investigate the claims of Feminists. Of course, she won't go to the authorities, grabbing her fans/lynch mob means she never has to prove anything.