Did Alison get a bad Rapp?


Jamie Walton, president and co-founder of an anti-sex trafficking non-profit called The Wayne Foundation, also addressed a tweet to the firm's American branch and wrote:

"Better fire Alison Rapp before Monday or there is going to be reckoning."

Patrick Klepek at Kotaku ... frames it around Rapp being a victim of harassment from Neo-Nazis and .. GamerGate. 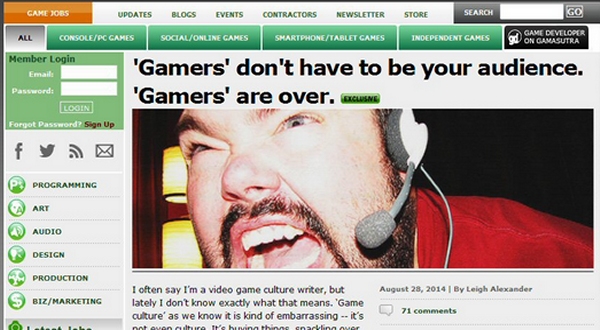 we manage to fire people from beyond the grave?

A response to [Gaming] Alison Rapp Update by MundaneMatt


At 3:34 - moonlighting might be acceptable but PR jobs are based on putting the needs of the company above everything else, which is why it's paid quite well for the entry requirements. You can be fired for all sorts of reasons that simply have to do with how you are perceived - you might be merely *accused* of a misdeed, and the accusation is sufficient.

(This is how the Westminster Parliamentary System worked as well)

Whatever nuances are involved don't matter - she cannot work in the PR field. In fact, I'd be worried about her around children. "Don't hate on men who like kids" isn't proof she's pro-pedo, but since she's talking about an age of consent of 13, it's hard to interpret it in any other way.

1 a company that markets itself to young children in conservative countries, what's more - countries that can ban Nintendo on a whim

This is the comment that got removed from @Eurogamer so now my followers get to see it. Debate not Delete#GamerGate pic.twitter.com/sqKQ7r4l1N
— Vic (@SpaceMidget75) (@SpaceMidget75) March 31, 2016


I thought I'd state my own views here.

I don't have a problem with the Japanese culture. It's weird, but it seems to work for them. There's no evidence that child rape is a problem there, and they claim it is much lower in their country than in the countries that repress such drawings.


Of course, it might turn out later that it's just not reported, but until evidence is presented, I'd have to say it was plausible that having such things legal means that there exists a safe outlet. After all, violent drawings don't seem to lead to real world violence, and countries that ritualised violence into sport don't seem to have the real-word rates of violence of countries without that outlet.

I also don't have a problem with an age of consent of 16, with exceptions for
Romeo and Juliet situations (kids shouldn't be put in jail for experimenting with other kids) and for power positions e.g. teachers.

However, diseases like Herpes are no respecter of youth, and most of them, once caught, are there for life.

I would not like to have to explain to my 8 year old daughter that that little sore is never really going to go away, and that the people she later loves and wants to marry may think she's disgusting as a result.


Lina Medina, from the Ticrapo District of Peru, gave birth by cesarean section in Lima at age 5 1⁄2. The infant was a 2.64 kg (5.8 lb), 47.5 cm (18.7 in) boy named Gerardo. Medina's parents, who assumed their daughter had a tumor, took her to a hospital in late March, where she was then found to be 7 months pregnant.


I don't know what the youngest father's age is - this is actually a serious issue as women have the legal right in many western countries to demand money from a child they have raped, yes, raped, if that child's rape impregnates them.

I can't conceive of an effective form of birth control for a young boy, even if you could teach them how to use it - changes in the size of the vas deferens means products like Vasalgel would be useless.

I have been informed by doctors that there are documented cases of 'virgin' pregnancies where the ejaculation took place externally but semen contacted the vulva - and that was all it took. Opinion on this seems difficult to substantiate, however.

Perhaps one day a pill will be invented that can be safely taken by a male child but I'd have to say that's firmly in the realm of science fiction.

Thus, even if all diseases ceased to exist, even if no power abuses occurred and children only had sex with each other - sex at an early age is perilous.

However, the goal-post shifting where laws designed to stop child exploitation have now been moved to cover dirty pictures of The Simpsons - who do not and can not suffer because they do not exist - that concerns me.

A law designed to shield real children is instead used to prosecute those who have repugnant thoughts? That is incredibly dangerous.The people who campaigned for Free Speech did so because speech is an expression of thought - and if our thoughts - even the worst thoughts - are not free, then we have no freedom at all.

16th April, 2016. It looks like Ms Rapp was working as a sexworker, which would be a huge violation of the contract with her employer and also the law! (discussion here)

On the manufacturing of outrage

Alison Rapp presented herself as the victim of online harassment with a list of 52 comments she labeled gendered hate back in October 2015. By digging into them I was able to uncover that...