When it's been 30 seconds and you haven't told anyone how offended you are pic.twitter.com/BQneBEfKaM
— Daily Cringe (@CringeLMAO) December 28, 2015


How? Electric shocks to the brain? What has this to do with science?


"It took less than a minute of playing League of Legends for a homophobic slur to pop up on my screen."


"In these times not really used if somebody is really a homosexual mostly used insteap of calling somebody stupid or a loser.
Ralph: Chris hasn't been answering his phone.

John: Yeah, he is probably hanging out with those other kids that's why.

Ralph: He is such a faggot.

John: Yeah him and his faggot friends."

Also see http://www.straightdope.com/columns/read/2112/how-did-faggot-get-to-mean-male-homosexual for the history of the term - especially since in Public Schools in England, it meant exactly what it means now, and had nothing to do with being gay.

Welcome to humanity. People use language, and languages change.  How will you stop that? By building a police state?

What am I saying, of course you are!

"Online gamers have a reputation for hostility."

Rubbish. Someone was somewhat mean. At worst, your feelings were hurt. Most would just see it as rough play.


Outside of gaming? People beat and murder each other. They stab, they burn, they crush.

And your priority is... the people who use mean words.

Oh? First you tell me Gamers are dead, then you tell me half of all gamers are females, now you say they are men but men are baaaaad!


"aggressors often threaten violence or urge a player to commit suicide" ... because... now I know you can answer this one ... because you just fucking said it.

Have you forgotten that bit already? They swear and carry on because it doesn't mean anything. No-one is hurt outside of your professional victim clique.

WHO THE FUCK THINKS THAT EXCEPT PEOPLE WHO LISTEN TO SOCJUS PROPAGANDA?

Listen, faggot, this is the reality outside the Internet.

Social Justice is all about controlling minds. It sees controlling words as a step on that path. The internet has been the greatest forum for free ideas and expression the universe has ever seen. It wants to end that.

"The Internet is OUR space", it proclaims. 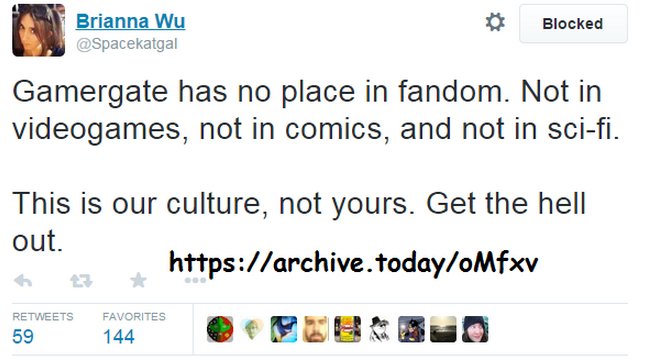 It demands the newspeak "safe space" be declared mandatory and made law.

SocJus. It genuinely believes that facts alter according to the needs of their narrative. It is the antithesis of Science.

In the name of 'safety' our freedoms are taken away. In the name of diversity, we are all told to be the same. Our enemies hate us, and try to take away our lives - and SocJus tell us to embrace their ways.

Hey, SocJus! You don't like words? I'll communicate in other ways.